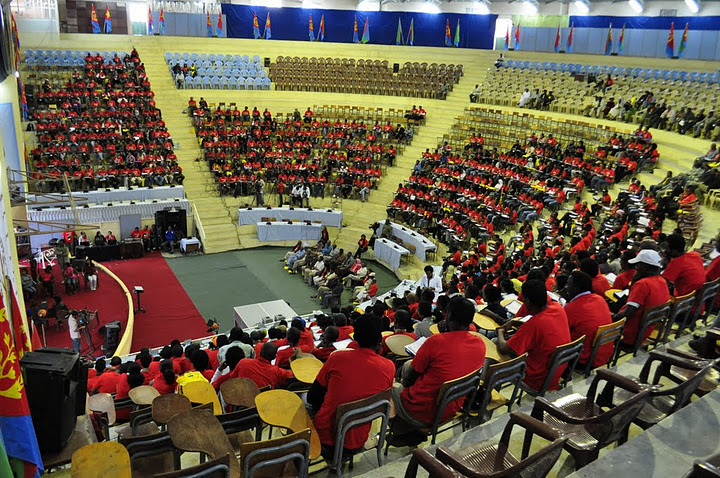 As the conference enters its third day Eritrea’s youth that have come to the historic town of Nakfa from various parts of the world and from within Eritrea are as ever enjoying the unity, and sharing their experiences by re-cementing the bond for the purposes of building a strong nation that ensures the interests of future generations.

Building an Optimal Political System and addressing Democracy in Eritrea

The Challenges of Youth in Developing Countries: In their Country and in Diaspora

Drawing strategy and programme for the Eritrean youth movement

Eritrean youth inside the country and the Diaspora have been working hand in hand and the National Youth Conference is one of its kind bringing together youth from various ministries, regions and Eritrean organisations from within Eritrea and the Diaspora.

Nakfa and its historic resemblance is described as “The Place of Resilience” particularly for reasons that no stone was left unturned by Ethiopian colonial regime to control it again. It is the pioneer as well as the trench of steadfastness and has become eternal pride for generations.

The general synergy and dynamics of the conference that brings in various experiences from all walks of life has so far becoming a melting pot in reverberating the common understanding of Eritrean youth. Certainly taking centre stage are the topics discussed and the debates that follow each topic. Nevertheless the journey that started from all parts of Eritrea, North America, Europe, the Middle East, Australia, New Zealand and Africa has had to pass through historic and victorious battle places like Afabet, Ashrum, and many more trenches where Ethiopian colonial military was defeated to never regain its military might that was described as one of the biggest in black Africa sending the enemy off balance and made Eritrea’s Independence a reality!

Participants of the conference not only enjoyed the magnificent landscape on the way to Nakfa, but were rather compelled to go back in years remembering our martyrs, our military valour, and the heavy price paid to gain Eritrea’s Independence. The other symbolic fact of the conference being held in Nakfa was the rhythmic flavour of Eritrea’s Revolution songs that created so much feelings in the hearts and minds of every Eritrean made even more sense along the way putting in context thereby linking the historic places with the Revolutionary songs and surroundings of the battles that took place.

The general consensus of the youth so far is the acknowledgment that the power of politics is behind the successes of the People’s Front in all its endeavours, and the youth as ever has to continue this strong heritage to raise the consciousness, organise, and equip the masses with the necessary skills. Key to this is being an analyst that is disciplined with moral in understanding the history of the Eritrean struggle, and also searching the truth of Eritrea’s reality (not by what is being said by historic enemies of Eritrea) to have a better perspective for transforming the lives of the Eritrean society and ensuring a country that enjoys all round freedom and independence for future generations.