Minister calls for continuation of building terraces and embankments 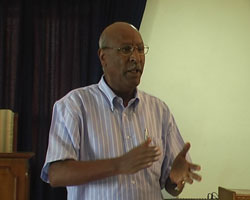 Massawa, 15 November 2011 – The Minister of Agriculture, Mr. Arefaine Berhe, called for the continuation of building terraces and embankments as such facilities are making due contribution in boosting agricultural production and animal resource potential.

In a meeting he conducted in Massawa with agricultural experts in the Northern Red Sea region, sub-zonal administrators, heads of the Ministry’s branch office, Mr. Arefaine pointed out that the available natural resources and climatic condition in the region are viable for agricultural investment. He further stressed the need to step up efforts in soil and water conservation in a bid to boost milk and meat production.

Briefings were also given on the outlined action program for 2012-2014 regarding development of irrigation farming, fruits and vegetables cultivation, livestock breeding and soil and water conservation, among others.

Likewise, the Administrator of the Northern Red Sea region, Ms. Tsigereda Woldegergis, said that though efforts are being exerted to boost production, particularly in the agricultural sector, still a lot remains to be done as regards raising production in bee-breeding, milk and related products.

The participants of the meeting adopted a number of recommendations.

Tags: Minister calls for continuation of building terraces and embankments