In this article, which was first published on ELEM Magazine in August 2011, the writer has made an attempt to address the invaluable contribution musicians of the 1960s made to the development of Eritrean music

The development of music in Eritrea has its own historical and traditional roots that date back thousands of years with churches and mosques teaching students hymns and chants in choirs from an early age. But one of the most innovative periods in the development of modern Eritrean music took place in the early 60s with the formation of Mahber Theater Asmara (Asmara Theatre Association), famously known as MaTeA.

Had it not been, in part, for MaTeA, Eritrean music would not be where it is today.

One of MaTeA’s many goals was to push for an Eritrean cultural and national renaissance. Though many of its stated goals were hindered by excessive censorship by the Ethiopian authorities at the time, it still went ahead and met the challenges head-on and accomplished some incredible feats.

Subsequently, for 15 years following its formation, the association contributed immensely to the sustenance of some of the Eritrean traditional music. At the same time, MaTeA introduced modern musical instruments, particularly to the Tigrigna and Tigre songs, giving rise to some brilliant and timeless musical arrangements. The blending of modern instruments and traditional Eritrean musical instruments in many Eritrean songs meant the arrival of a new trend in the development of Eritrean music.

The association’s aim was not limited to playing a role in the revival of Eritrean music. The ultimate goal was to also covertly strengthen the national identity and instill in the youth of the time a sense of duty and responsibility. While embarking on this risky task in what was a highly precarious political climate of those days, the association faced several hurdles along the way and in spite of the difficult circumstances it realized most of its objectives.

Another milestone in Ma.T.A’shistory was the empowerment of women artists. The inclusion of women artists in the 60s, in what was otherwise a mainly men dominated field, was another high note of the association that cannot be overlooked. By bringing women artists to its line-up, the association was able to fling the door wide open for Eritrean women in the world of art. In fact, it can be argued that MaTeA managed to mobilize Eritrean women to contribute to the growth of Eritrean arts in general and Eritrean music in particular.

The association’s policy of inclusion was not restricted only to Eritreans, but also to Ethiopians, Eritrean-Italians, Sudanese and Egyptians as well. This certainly is further proof of MaTeA’s farsightedness in bringing people together and fostering lasting friendship with other cultures through music.

Up to that point, many of the songs, plays and other stage performances were exclusively Italian and for Italian-only

audiences. As a result, the natives were left with no option of exercising their right to be creative and advance their artistic talents. But with the inception of MaTeA, all that changed when it began staging plays and performances in Tigrigna and Tigre languages.

Having been long deprived of an opportunity to enjoy songs and plays in their own languages, the youth of Asmara were very enthusiastic about MaTeA. They supported the association and that very support from the Asmarini in turn meant more and more was expected from this home-grown association which eventually encouraged the various artists to come up with their own original sound.

Throughout its existence, MaTeA has also produced many talented singers and musicians who eventually became legends in their own right. Giants such as the indomitable Ato Ateweberhan Segid, Yemane Gebremichael (Barya), Alamin Abdeletif, Teberh Tesfahuney, Tewolde Redda, Osman Abdelrehim and many more have left an indelible mark on the Eritrean musical landscape. Some talented MaTeA bred musicians also played at international venues as they quickly caught up with the 60s and 70s American psychedelic rock and Motown soul music styles. Some of the great MaTeA musicians who soared to fame include the acclaimed guitar virtuoso Tekle Adhanom (Huwket) and keyboard maestro Abdella Abubeker.

This was very evident in the fact that there were several other Eritrean musicians who hailed from MaTeA and in varying degrees contributed to the development of Ethiopian music of the 60s and 70s. Most of the bands in Ethiopia at that time had many Eritrean members. 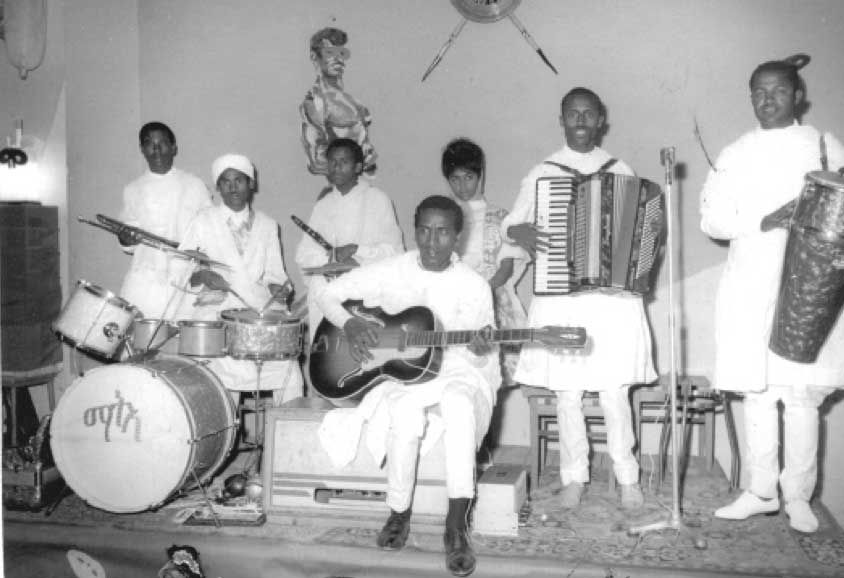 As an independent association, MaTeAalso played a significant role in giving back to the community by taking part in various humanitarian activities, which suggests it also lived up to its social responsibility. For instance, MaTeA contributed a big portion of the proceeds it was collecting by staging shows to charitable organizations such as local orphanages, the school for the blind as well as adult literacy programs.

Given the long history and creative nature of Eritrean artists, the task now for today’s budding singers, songwriters and musicians is to strive even higher and advance Eritrean music so it reaches audiences far beyond its borders and in the process, emulate the ideals of MaTeA. And with that, just like what the late Abraham Afeworki always sought to do, they can take Eritrean music to a whole new level.