Issue is not the lifting of, but why sanctions in the first place? : Press Statement 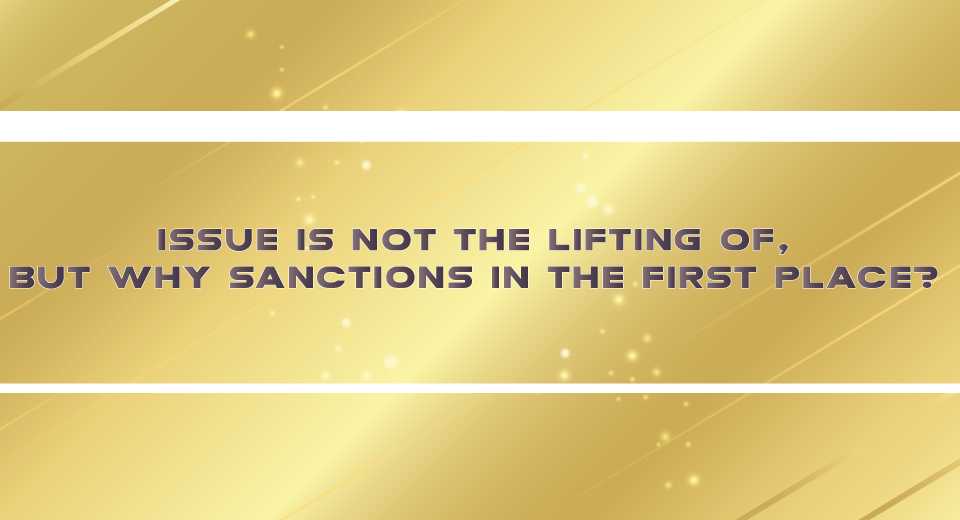 The UN Security Council has today lifted the unwarranted sanctions that were imposed on Eritrea in December 2009 and 2011 respectively.

The Government of Eritrea welcomes this belated decision to redress injustice, almost a decade after nefarious acts were taken inculcating indefensible harm on the country.  At this juncture, the GOE pays tribute to the vigorous defiance of the people of Eritrea inside the country and abroad against injustice; to their characteristic resilience and patience in the face of adversity.   It also expresses its gratitude to all friends of Eritrea who added their moral weight, and contributed in different ways, to the lifting of the ignominious sanctions.  Congratulations to all!

But even as we turn the page of this dark chapter and focus on the future, we must ponder on, and take stock of, what transpired; why Eritrea was needlessly victimized; what were the dynamics that underpinned a travesty of international justice on this scale?

And here the verdict is crystal clear.  The sad fact is three previous US Administrations (the Clinton, Bush and Obama Presidencies) pursued a misguided policy of propping up regional proxies or anchors, the TPLF regime in the case of Ethiopia, within the framework of a uni-polar global order.  Key pillars of this policy included:
•    Stoking border disputes and conflicts to manage the resulting mayhem;
•    Fomenting and institutionalizing ethnic and factional polarizations;
•    Undermining regional integration and cooperation so as to create a conducive climate for wanton interference.

The symptoms and legacy of this malaise are illustrated in sporadic flare-ups of ethnic strife that continue to beset Ethiopia, as well as in the acute societal fragmentations that prevail in Somalia and South Sudan today.  The complications and external interventions spawned by this reality have inevitably created a fertile climate for the forces of terror and subversion.

The deleterious consequences of this misguided policy in terms of loss of life, displacement, migration, economic deprivation and poverty have been considerable indeed.  Irreparable damage and loss of opportunities were callously inculcated to the more than 150 million people who inhabit the Horn of Africa region.

As it happens, the litany of wrongs committed against Eritrea that include: instigation of senseless border disputes; outright military assaults; political subterfuges; relentless campaigns of isolation, defamation, and psychological warfare; economic strangulation; and ultimately, the unwarranted sanctions imposed in 2009 with the unwitting complicity of the P5;  cannot be seen outside the context of this misguided policy.  Needless to emphasize, the damage incurred on Eritrea has been enormous indeed.

Furthermore, the vain attempts carried out to maintain and extend the sanctions through flimsy pretexts even after all the lies were exposed have exacerbated the wrongs meted to Eritrea.

Tags: but why sanctions in the first place? : Press StatementIssue is not the lifting of