Investment, not charity, the key to future prosperity for Africa: President Afwerki

“We need investments, real investments. Charity is not going to save Africa, or transform Africa into a real market,” President of Eritrea Isaias Afwerki 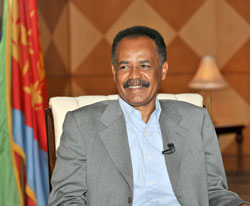 As the mining sector opens up, Eritrea looks forward to building a sustainable economy. “We need investments, real investments. Charity is not going to save Africa, or transform Africa into a real market.”

Speaking during an interview with Prisma Reports, in which he praised China’s business relationships in Africa, President Isaias Afwerki of Eritrea has outlined what he believes is the solution: better partnerships, conditions that are conducive to investment, without doubt – but also, importantly, a thriving manufacturing sector.

“Africa is marginal; it is not even a market,” he says. “We cannot talk about Africa as an economy. Globally, what do they represent in terms of productive capacity, in terms of economic growth, in terms of their trade partnerships with a number of continents? They don’t represent anything.

Governing a land brimming with valuable resources that include gold, potash, zinc, copper, salt, fish and the possibility of oil and natural gas, Afewerki believes China’s next round of investment should be aimed at helping the continent grow in self-sufficiency.

In September, the President visited New York to address the 66th session of the General Assembly of the United Nations, where he met China’s Foreign Minister, Yang Jiechi. It was a fruitful exchange.

Mining production started in Eritrea this year. The government has allowed more than 30 companies to come and invest in that sector and is taking advantage of the increased foreign direct investment in the real economy. President Afwerki notes how the country’s debt is “almost insignificant” when compared to other countries: “We have been judicious in our approach to borrowing money, even getting aid from outside because it would disable us and put a heavy load on our shoulders,” he says.

He emphasizes the transparency he and his government have been working to improve in recent years. “It is a very clean government,” he says. “You have the legal, political and laboral aspect of the investment opportunity for foreign direct investment and an infrastructure. Our policy for the last 20 years has been focused on creating a viable environment for investment, both local and foreign. We are now in a very comfortable position.

“The Chinese government and Chinese investors are working to develop achievable programs. The support and facilitation for investors coming to this country is huge.”

The President is also hoping China will help his country maximize its particular domestic advantages, not least an exceptional location on the Red Sea.

“In the 19th century, during the colonial era, Eritrea was a gateway to the Horn of Africa. Location is a comparative advantage, and we need to invest in that location. We need good harbors, good roads, good energy programs, and good communication links. Unless you have that infrastructure in place, you simply talk about location as a virtual advantage.

“We need to develop that comparative advantage jointly so that both countries benefit. China can benefit and Eritrea, within the collective manner, would benefit from the infrastructure. Its harbors, its airports, its electricity, its roads, its water supply, its communications, land, air and sea transport – those investments are what we are working on with the Chinese. We need to have viable roads, not only for the domestic market, but also for the regional market. We link to Djibouti, Ethiopia, Sudan and other areas, by sea, by land and by air. So that will require a huge investment in infrastructure – that is what we are seeking to do with the Chinese.”

Trade policies also need to be harmonized within the region for it to really succeed, the President believes. “At the moment, there are no policies,” he says. “Unless we develop a free trade environment with the region, none of the other programs will run smoothly.”

Agriculture, which accounts for more than 14 percent of GDP and employs around 80 percent of the population, also presents an opportunity for Chinese investors.

“We have developed a number of irrigation and soil conservation programs, and the technology has reached a level where you can develop agriculture in arid, or semi-arid land,” he says. “But that is not all – our livestock is another big advantage and fishing is also a critical sector for us in terms of exports. We are also working on cotton cultivation. We have food and grain production, and fruit, vegetables and horticultural developments in place to provide food security for the country. The next step, of course, is to develop the agro-industry; we need to develop commercial and high-value crops for export.”

The Premier is optimistic that a young and dynamic country like Eritrea will, with the right investment, be able to build a viable economy eventually. “We have only done the minimum in terms of our long-term development,” he says. “It would be foolish for us to be complacent. With each achievement, the challenge becomes greater for a country to develop its economy to a sustainable level.”