Why Invest in Eritrea? 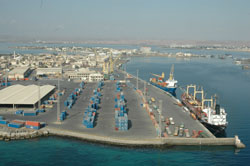 Eritrea’s Strategic Location along the Red Sea provides ideal exposure to one of the world’s busiest shipping lines and established linkages to other areas of the region and beyond. The port of Massawa is a transit point for goods to the Middle East, European and Asian Markets. The development of the port is poised to bring about potential gains to trade.

The establishment of a Free Port Zone at Massawa is further expected to boost trade prospects within the already established Middle Eastern and African Markets. The Massawa Airport is equally capable of facilitating traded goods in transit to regional and global destinations.

The Bisha Mining Company, which is a mining conglomerate between the government and a Canadian company (NEVESUN), has started production in early 2010. The company produced more than 390,000 oz of gold during the first year of operation and expected to produce more than 450,000 oz in the second year. Copper production will begin in the second year and peak at 184-million pounds of copper in the fifth year of operation. The mine will begin producing zinc in its sixth year. There are many more mining contracts on the making. The potash mine in Danakil Depression with a planed output of up to 10,000 ton a day life span of over 150 years, the Zara and Dubrba gold mining Eritrea stands to share in hundreds of billions of dollars in mining profits.

The private sector is seen as the major development partner, an engine of growth that will help jump start the economy and eventually lead to long-term growth in the Governments development agenda- as explicitly indicated in the Macro Policy document (1994). The Government has achieved so much at adopting favorable monetary and fiscal policy, reduced regulatory framework and bottlenecks by offering incentives and avoiding trade and other related barriers to attract private sector investment and to expand exports.

In line with the macro-policy objectives, a revised investment code was issued in 1994. The main objective of the investment code is to promote investment in Eritrea as well as develop and use the country’s natural resources. Within this broader objective, the investment code intends to achieve objectives including, the promotion of exports, encouragement of competitive import substitution industries, enhancing transfer of new technology, securing equitable regional growth, development of small-and medium-scale enterprises, and expansion of employment opportunities (GOE, 1994: 5).

The investment code provides various benefits to investors. For instance, profit and dividends of investors, payments for a foreign loan, fees, royalties, or proceeds received from liquidation of investment and/or expansion, and payment received from the sale of transfer of shares will be remitted in accordance with the rate of exchange prevailing at that time. There is no minimum threshold value of investment. Moreover, with the exception of domestic retail and whole sale trade, import, and commission agency that requires bilateral agreements of reciprocity with the country of investor, all areas of investment are open to all investors both foreign and domestic (GOE, 1994:6). Foreign capital may establish any enterprise on its own or in partnership with local capital.

Moreover, the investment code guarantee, that capital and other associated foreign-owned assets will not be nationalized without due laws. To this effect, Eritrea has also signed the convention establishing Multilateral Investment Guarantee Agency (MIGA) and the convention on the Settlement of Investment Disputes between States and Nationals of other States (GOE, 1998: 20). It established, The Investment Center, which is the legal body responsible for the promotion of investment. Issuance of certification to investors with a maximum delay of 10 days (GOE, 1994:15), Land Proclamation that provides usufruct rights for the long-term up to 99 years has been issued since 1994 and is expected to facilitate the allocation of land for investors (GOE, 1994; IMF, 1996:9).

Significant progress has been made since independence regarding the liberalization of trade policy. The 1994 Legal Notice 18/1994 reduced the number of import tariffs to twelve. Capital goods, raw materials, and semi-processed goods have only a 2 % tariff. Basic goods duties range from 3 to 20%. In addition, customs procedures were simplified. In the mid-1990s, the government began major investments in infrastructure, roads, electricity, dams, and port operations to support the further development of exports. To expand the market for import and export potentials the country entered into active membership in regional organizations such as IGAD and COMESA.

Peace and security are the main pillars of a true and conducive investment environment in Eritrea. The economic policy underlines the necessity to have a market lead economic system. The private sector should have the upper hand in all economic sectors with the government to intervene in major public shares. The following are some of the steps taken for a better investment environment:

The investment policy of Eritrea provides the following incentives to foreign and domestic companies.