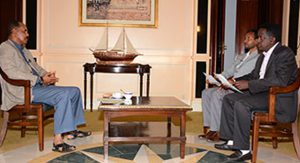 Eri-Tv and Radio Dimtsi Hafash conducted a 90-minute long interview with President Isaias Afwerki yesterday on important and regional issues.  The second part of the interview on important domestic issues is scheduled for next Saturday.

President Isaias dismissed Al-Jazeera’s fabricated, latest news story on the “deployment of Egyptian and Emirati troops and weapons in Sawa (western Eritrea” as ridiculous and the “joke of the New Year/2018”.   As usual, this baseless story was widely recycled by other media outlets without any verification.    President Isaias underlined that this fictitious story was a continuation of numerous lies deliberately peddled against Eritrea by various media outlets in the past years in order to foment tension and to deflect public attention from real domestic problems in certain countries.

Outright lies repeated ad nesuem by an assortment of Eritrea’s detractors have been many indeed, President Isaias noted.  These include, among others, wild stories of juxtaposed “Israel and Iranian military bases in Eritrea’s Dahlak Islands… Israeli Listening Post at Amba/Mount Soira (southern Eritrea)… Egyptian troops deployed in Tsorona (propagated last year prior to and apparently to justify TPLF aggression in that area at the time)”.

President Isaias asserted that the latest Al Jeezera news story was concocted and planted by the TPLF regime in Ethiopia   – where the TV channel has opened a new bureau recently with the specific task of spearheading and coordinating the disinformation campaign against Eritrea.  The underlying purpose of the Egyptian troop deployment fake story is to drive a wedge between Sudan and Eritrea and plunge the Sudan into unnecessary conflict.   Certain special interest groups in the Sudan were complicit in this act.  President Isaias stated that the Sudanese people will not be misled by this crass disinformation and fall into the trap.

In regard to recent media reports of an agreement between the Sudan and Turkey for the establishment of a military base by the latter in Sauken, President Isaias noted that “it would be unwise and premature to comment on this matter at this stage on the basis of hearsay and without incontrovertible evidence”.   Available information at this juncture indicates that this is indeed a public relations stint.  On the other hand, President Isaias stated that Turkish military presence in Somalia is both unjustifiable and inexplicable since it has no geographic proximity or bearing on Turkey’s national security considerations. In this perspective, if the purported establishment of a Turkish military base in the Sudan; i.e. on the western flank of the Red Sea were to become  true  – this development will provoke certain questions in view of the sensitivity of this important maritime route.

President Isaias Afwerki emphasized that the unfolding situation in Ethiopia is a matter of high concern to the people and government of Eritrea above any other country.  The intractable political crisis that has beset Ethiopia in the past months is the result of the TPLF’s myopic and deliberate policy of institutionalizing ethnic polarization for the last 25 years or so.     The TPLF regime pursued this misguided policy so as to secure total political, economic and security domination of the country to benefit a narrow group.  The insertion of the “right of secession” in the “Federal Constitution” was maliciously crafted in order to legitimize and perpetuate centrifugal tendencies of ethnic polarization and institutionalization.  “This game is now over”, President Isaias stressed.  The damage inculcated in Ethiopia and the region as a whole is considerable indeed, President Isaias stated, adding, “external powers who provided subsidy and succor to the TPLF regime throughout these years must also share the blame”.

President Isaias concluded his remarks by expressing the hope that the peoples of Eritrea and Ethiopia will recoup, in the near future, the opportunities they had lost in the past 25 years due to the TPLF’s noxious policies.