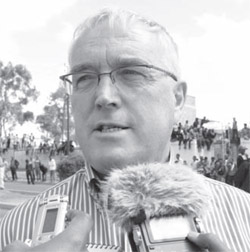 The 7th African Cycling Championship was held in Eritrean Capital Asmara with great enthusiasm. On behalf of the Union Cycliste Internationale (UCI), the President of the union Mr. Pat McQuaid, attended the championship ceremony.

During the second day of the competition, Individual Time Trial (ITT), Eritrea Profile reporter, Tesfahans Isaak, had a chance to interview him. Excerpts of the interview follow:

Could you share us your impression of this great sports event?

I am very happy to be in Eritrea, because I know that cycling is very strong in Eritrea, with this great sports fan of the public. And I see that, here today, there are many people watching this race and supporting the riders.

There is another important thing that the championship is very well organized, everyone is doing great job with due oversight. The second aspect is that the history of bicycle in each citizen, together with the country’s competitive performance in cycling. I am very happy of the man [Daniel Teklehaimanot] whose progress I follow closely; he will have joined the team by next year to play a part in the biggest races of the world. And I also can see that there are other Eritrean cyclists who have similar qualities, with which, who can have a very promising future in cycling. The UCI is also ready to work with those riders to prepare them for the highest level of cycling like we deal with Daniel.

What is your appraisal on the enforcement of this continental sporting event?

I see the general management very good because it is obvious that there is an organization here in the country that manages races every weekend. So, the roads are safe, the security is there, the police are there for the athletes; it is perfect. There is no need of worrying that people or any animal like dogs might run across the roads before the athletes. So the general management of this great contest is in a very good level.

How do you describe the enthusiasm of the spectators?

Speaking to the role of spectators, I just call it EXCEPTIONAL. I have been coming to Africa since I was elected president of the UCI in 2005, and the first African championship hosted in Egypt in the winter of the same year; but there was nobody watching the race. And when I come here now, I see thousands and thousands of people watching the race. All enthusiastic people supporting all of the athletes, particularly of course the Eritrean athletes, but also support all the others. I think it is wonderful and good for the future of sport in Eritrea and most notably in Africa than it is so popular in this country.

How do you comment on the general performance of the Eritrean cyclists?

Now, I am witnessing that the general performance of the Eritrean riders is very good. They have already won the Team Time Trial conducted on Wednesday and we think that they have a good chance of winning this morning as well, in the time trial. And at the third stage that will be conducted on Sunday, with the public support and the ability of the Eritrean riders, I think they will stand a very good chance of winning as well.

So, all in all, the performance of the Eritrean cyclists is good. And it is not just Daniel only, there are others too; you know good riders. And as a result, the future looks good for Eritrean cycling.

What makes Eritrea qualified for hosting this year’s continental championship?

I am very pleased that they are hosting the championship and I am very delighted too to be here that I only have arrived last night. I am only here for a couple of days but the decision to host the championship is taken by the African confederation and I fully supported the decision because this is a cycling nation, sports nation, people love sport, they love cycling; it is very fantastic. So it is only correct that Eritrea would keep this championship at some stage. And I am looking forward, may be for the coming years, to come here to Eritrea to attend the tour of Eritrea.

Could you tell us the relations between the Eritrean Cycling Federation and UCI?

The relationship between the UCI and Eritrean Cycling Federation is already straightened. We already have a very good relationship because of the cyclists we have in Switzerland, generally in Europe, that we are preparing them for European teams. We believe Eritrea can produce cyclists of good ability and good potential than we are prepared to work with those cyclists to trying bringing them to the highest level as we deal with Daniel and as we will deal with other athletes as well.

And I am sure Daniel will be the first African ever to participate in the world tours and highest level of races, which is a very good achievement for him. And not just for Eritrea but, all of Africa will be watching how he will beat the drum. It is also my ambition that there will be many more Africans and many more Eritreans in the world level races in the years to come.

Daniel will be the first African ever to participate in the world tours and highest level of races. Pat McQuaid, UCI President

Altitude seems an excuse for the other teams here in the country. What could you say about this?

They have done a very good job and they have treated it seriously that they have well experienced from the tour of Eritrea on how to organize a bicycle race. It is very good, and the public also have experience of cycling. They allow the cyclists room to race freely, they don’t jump into the runway. So, it is a good respect for the cyclists here along with their good support.

Eritrea’s topography seems good for cycling contests as it composes varied course levels. But the competition is conducting only on the flat course. Why is that?

Exactly yes, there are many mountainous areas even steep hills, here in the country, but tour of Eritrea can go to these areas. But, in order to promote the sport in the capital of the country, which is where we are, then it must stay within the city. And at the end of the day it is the cyclists that make the race, and the cyclists whether in the flat course, medium hilly course or very hilly course, it is the cyclists that make the race. And so far, it has been good for the time trials, and I think on Sunday it will also be a very good race.

Who do you think will be the champion?

I really don’t know fully what will happen on Sunday and on what type of course it will be, but I think Daniel will have the good wish of mine; and most notably Eritrea.