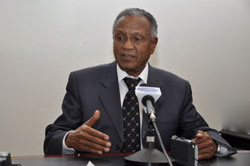 The opening of medical schools is indeed a turning point in Eritrea’s healthcare services. This development has also opened a chain of developments in the healthsector. Thus, the achievements registered in graduating general healthcare practitioners is further reinforced through the opening of post graduate medicaleducation programs that focus in specialization.

The following is a brief interview conducted with Dr. Oqubaslasie Ghebreamlak, Director of the Orotta Post Graduate Medical School.

Could you please brief us how the Postgraduate Medical Education program came into inception?

The post graduate medical education program started inJanuary 2008 in the fields of pediatrics and surgery.Eight trainees in pediatrics and five in surgery became pioneers of the program.

What is to be noted here is that extensive discussions and studies were conducted for about three to five yearsin curriculum development. The late Shalih Meki’sunremitting efforts towards making this a reality was just beyond compare. There was also good contribution ofGeorge Washington University and most notably Dr. Haile Mezgebe’s efforts and constructive involvements was also very imperative in starting this post graduate education.

Since all the students who joined the post graduate medical education were very expertise doctors, the courses in pediatrics were covered in just two years and courses in Surgery in three years, both of which were supposed to take from four to five years of education. Apart from this year’s graduates, a total of 12 pediatricians have so far been graduated in Pediatrics.Three pediatricians would also graduate in June 2012.

When did the OB-GYN Program start and how has it been progressing?

The OB-GYN post graduate residency program started inAugust 2009 and Dr. Lisa Masterson is among the founders of this program.

This program has mostly been offering trainings with local instructors. But, very qualified visiting specialists from renowned universities have been making due share in making sure the curriculum meets international standards. Annually, around 9,000 women have been giving birth in Orotta Maternity Hospital; this number, indeed, exceeds by three folds from the OB-GYN medical treatments that have been offered elsewhere. But, one should bear in mind that the greater numbers of deliveries this hospital offers, the greater are the opportunities for practical courses in OB-GYN programs. Apart from this, varied types of essential teaching materials have been provided to make sure the trainees are getting up-to-date medical knowledge.

During the launching of this post graduate education, five programs were charted out in the OB-GYN and each covering a three-year course. The first phase of the programs has now been covered with this year’s first commencement of a five-membered graduating class. Since, the five graduates have been expertise in conducting operation for obstructed delivery; we have minimized the course timeline to three years. Where as, the next batch embracing 12 members in three groups, that is in pediatrics, surgery and OB-GYN which has joined the post graduate education some six months ago would pursue the courses all through the coming 4 years.

How well-versed are the postgraduate students in medical education?

As they have since long been anticipating for such occasions to come, the post graduate students have shown great excellence. This has further been attested through external examiners from Khartoum University, and also from Aga Khan University in Nairobi, Kenya and also from a University in Germany. Two of the five OB-GYN specialists, for instance, have graduated at a distinction level, the rest three have attained a very satisfactory result which amazed the external examiners.

The postgraduate medical education program has been alleviating varied healthcare problems in a great deal. But how far has this been vital in decreasing child and maternal mortality?

Reduction of Child and Maternal mortality rate has been the principal goal of the Ministry of Health.

The Ministry has a Reproductive Health Unit which charts out programs and gives necessary support at a national level. Through this, we have identified the gaps at a national level. We may have sufficient number of expertise in the Central region, but with the exception of a few specialists in Mendefera and Keren, we still do not have OB-GYN specialties in other corners of the country.

However, taking into account that educating healthcare professionals takes a considerable length of time, the Ministry of Health has been giving short-term courses towards reducing child and maternal mortality in a very short timeline. Under the work directives of Ms. Amna Nurhushien, the Minister of Health, a six- week extensive training courses in OB-GYN have been given to medical graduates of 2009 and 2010. The courses are aimed at giving timely emergency services and broadening the existed knowledge of operating obstructed delivery.

This time, almost all hospitals of the country are offering delivery services with efficiency. Fistula occurrences would be there fore eradicated through assisted delivery. Of the total 100,000 deliveries, according to a research conducted in 1995, mortality of around 1,000 motherswas reported annually. But, this has been reduced by half. The ultimate goal of the Ministry of Health is, nevertheless, to reduce it to a least possible level.

What are the prospects of the postgraduate medicaleducation program?

The developments so far registered may be viewed lightly noticing that only five OB-GYN specialists have graduated in this first commencement. However, for there have been a growing number of medical graduates that continued since 2009, the post graduate medicaleducation program will continue to sustainably train specialists. So, we would have a capacity to go beyond fully meeting local demands. Hence, we are now focusing to train medical experts not only at specialist level but also at sub-specialist levels.

We are also looking far ahead to treat cancer through radiotherapy. The cancer treatment services would not be confined to mothers, but fathers who suffer fromprostate cancer would also become beneficiaries. The Ministry’s Reproductive Health Unit has been working to facilitate this program. Likewise, infertility problemswould also be addressed gradually. The opening of a new in-vitro fertilization program in Asmara is among the long-term plans of the Ministry of Health. We are conducting discussions with partners to make this a reality.

The benefits of training healthcare specialists locally is that the trainees render services while attending the course and after graduation. We have also planned to construct residence for the medical specialist and we hope to succeed in this.