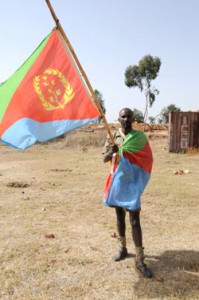 Asmara, 18 June 2012 – Mr. Saleh Mohammed Mahmoud, a citizen who annually carries out trek on the occasion of Martyrs Day on June 20 asserted that honoring the trust of martyrs involves fulfillment of national obligations by every citizen. “On my way across the places where our heroes fell and in which the valor of the Eritrean people was demonstrated during the armed struggle, I feel pride and at the same time indebted,” he added.

Mr. Saleh further indicated that he started the trek on June 8 in Adi Sheikh Al-Amin, Dige sub-zone, and passing through Agordat, Engerne, Degesei, Megawda, Diluk, Ad’kukuy, Mentai, Mensura, Gerger, Mai-Medef, Denagul, Milezanai, Tseazega and Asmara – all the way to Ginda. Reports indicate that he has continually been undertaking trekking on foot in various areas since 2007 in tribute to the fallen heroes.

Mr. Saleh also called on the new generation to bequeath to posterity the national values, and thereby play vital role in safeguarding the dignity and progress of the nation.