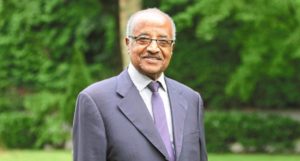 Your Excellencies Heads of State and Government
Distinguished Heads of Delegation
Ladies and Gentlemen,

Allow me to join other speakers to express our gratitude to President Putin for the initiative he has taken to host this Summit. Let me also express our best wishes to the people of Russia for greater economic growth and prosperity. We are indeed thankful for the invitation and opportunity accorded to us to express our views on issues of paramount importance to our Continent and its external partners.

Let me now proceed to highlight, in very concise terms, our views and approaches on various external initiatives launched to cultivate cooperation with Africa.

As we underlined in our speech at the recent UNGA, misguided polices of uni-polar hegemony have only spawned interminable crises and destruction for the past 25 years since the end of the Cold War. The flaws and incompatibility of such a world order has now become very apparent. As it happens, these are critical times where the prevalent international order is at a veritable crossroads and undergoing through a period of transition.

In the second World War, the people of Russia had fought against fascism with heroism. The heavy sacrifices they paid was for global justice, stability and prosperity of all peoples. Unfortunately, these lofty ideals could not be achieved in the subsequent period of the Cold War as the Soviet Union ultimately imploded under the combined weight of cumulative external adversity and concomitant lack of leadership.

In the past 25 years, the Russian Federation has overcome internal malaise; vanquished external schemes of “containment”; and is, today poised to restore its rightful global position and influence. The policy of deepening and enhancing its ties with Africa must be seen within the framework of this global adjustment of its international relations.

In the Cold war period, the peoples of Africa waged decisive struggle to uproot morally abhorrent and exploitative colonialism and earnestly embarked on nation building. The road-map charted out by the Founding Fathers to secure liberation and justice; to ensure stability and bring about economic growth and prosperity of all the African peoples in an equitable manner has not come to fruition. External agendas of incessant domination, subversion and exploitation coupled with internal fragmentation and corruption have resulted in a situation of intractable crisis, hunger and suffering. As it happens, Africa remains a marginalized and backward continent.

The OAU which was established in 1963 – against the backdrop of the Cold War – could not advance the aspirations of the African people in the three decades that followed. This prompted the restructuring of the OAU and the establishment of the AU in 2002 along the principles of, and taking the EU as the imitable model. Here again, the efforts have not been successful. The fact that 90% of the various projects undertaken were funded by external sources and over 50% of the AU’s budget continues to be covered by foreign assistance amplify the magnitude of the problem.

These are the indelible facts. Most of solemn ties of cooperation forged with our development partners really constitute “zero sum games” to the disadvantage of Africa. Although there are many fingers that point at the hegemonic and domineering parties for this state of affairs, it is Africa that shoulders principal blame and responsibility. The solution also rests primarily with Africa. At the end of the day, genuine partnership will be fostered only when Africa finds durable and genuine solutions to its problems.

The Russian Federation possesses robust potential in all fields and fronts. The prospects for impacting ties with Africa are also huge. These substantive opportunities will become achievable when the Russian Federation pursues a new approach that is distinctly different from the stereotyped modalities of other partners. In our view, this must be premised on ties of cooperation that is:

• In consonance with the current and future trends of the global situation;

• Does not render Africa a playground for the rivalry and influence of big powers;

• Gives primacy to Africans to address and resolve their own problems themselves and thereby foster genuine partnership with external actors through marshaling and leveraging their endowments and resources;

• Charts out a joint road-map of cooperation predicated on a global order that upholds international law.