Ethiopia : Tourism is Dangerous in Ethiopia Thanks to Meles Zenawi 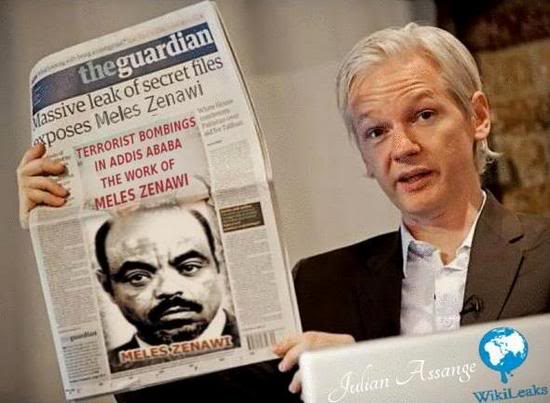 Late Monday on January 16, 2012, Ethiopia reported two Germans, two Hungarians and an Austrian were killed in a deadly attack in Ethiopia’s North-Eastern Afar region. During the attacks, a Hungarian and Italian were wounded while two Germans had been kidnapped. The unsuspecting tourists were attacked, wounded, captured and killed inside Ethiopia. This incident was unfortunate for those who lost their lives, those that suffered through it and, for their families. This incident was also devastating for the tourism industry of Ethiopia and those who depend on it for their livelihood.

Regardless of how the genocidal regime of Meles Zenawi tries to characterize the incident or who it claims has perpetrated the killings, there remains one fact it cannot deny. The incident took place inside the borders of Ethiopia. And it happened while under the protection of Ethiopian authorities.

On the 19th of January, The Voice of America (VOA) aired an interview with Information Minister of Ethiopia Bereket Simon, and in it, the Minister openly admitted that Ethiopia does not and cannot control its borders. Ethiopia is a country under fire in every direction due to the reckless adventures of the minority regime inside Ethiopia and the region. In Ethiopia, rebellion is flourishing throughout the entire country. There exists the Oromo Liberation Front, The Oganden liberation Front in Eastern Ethiopia, AEDUF in the Afar region, there is the EPPF in the central region, the Benishangul in the West and the Tigray movement TPDM etc…operate inside Ethiopia for different reasons. Some are fighting for self-determination and the others for greater freedoms from the oppressive minority regime.

This is how The Christian Science Monitor characterized Ethiopia’s claims. “This week, even before Ethiopian officials knew how many people had died, or even when the fatal shooting of five European tourists in its remote northeastern region of Afar had taken place, they were sure of one crucial detail: It was Eritrea’s fault.”
It is convenient for Ethiopian authorities to claim Eritrea did it for many reasons. It is easier. It deflects attention away from Ethiopia’s ever-exploding internal civil struggles. It is within the strategic objective of trying to label Eritrea, as a country that sponsors all the anti-regime activities as terrorist activity and within that context, all the rebellion in Ethiopia is considered terrorism and, the rebels’ terrorists.

But here is the problem with that assumption and claim. If Eritrea is capable to develop all that activity inside Ethiopia, what that means is Meles’s regime has effectively lost control of Ethiopia. The authorities in Ethiopia have lost control of the entire country.

The various movements in Ethiopia have been there for decades fighting for their rights. The OLF was there before the regime came to power; the Ogaden has been mired in conflicts for decades, and so have the Afars. These groups are fighting for denied rights by Ethiopia. They are not terrorist organizations. In fact, in contradiction to Meles’ claim that these groups are terrorist the US never labeled the OLF or others as terrorists. In fact, they have offices in the US. Meles and his cronies know this fact.

In this case, the blanket claim by the regime that Eritrea is at fault in order to cover up its internal problems backfired in many major ways. First off, the regime looked defeated by playing a victim. Secondly, it lost any credibility that it may have had internally and globally because, the truth came-out swiftly and contradicted their fabrications making them look pettier. Thirdly, it gave AEDUF, the rebel group, international exposure they never had and, advertised Ethiopia’s internal conflicts to the world. Fourthly, and most importantly, the minority clique gave the world unadulterated evidence that the regime has lost its legitimacy. The genocidal regime, in order to score a political point against Eritrea threw all discovery mechanisms-out and actually got in the way of the evidence-discovery process thus denied the world access to truth. As The Christian Science Monitor reported, “They were sure of one crucial detail: It was Eritrea’s fault” before any meaningful information was extracted.

This is clear evidence that the regime is not about finding-out truth to protect the Ethiopian people and the tourists. The regime was not concerned about the tourism industry of Ethiopia. This is a major PR disaster for the tourism industry of Ethiopia. By infusing Eritrea in the killing, the illegitimate regime magnified the level of negative attention into all tourism related activities of Ethiopia. This was in effect advertising that announced; come and tour Ethiopia and you might earn the chance to be killed, wounded and captured. Just imagine, can anyone dare take the volcanic tour in the Afar region after this? The answer is NO. That means the people in the Afar region will suffer because an industry or a means of income was taken away from them. This is not a sign of a caring government.

The rebels quickly gave their condolences to the families, facilitated the release of those captured and, claimed those that died were killed by Ethiopian authorities. This put the minority regime in a spot and forced it into a defensive position.
Here is the reality, prior to his fall, the Mengistu regime was losing large swath of territories, to then rebels, the current regime, in the same manner the minority regime is losing now. This incident provided a great opportunity for the world to see that Ethiopia is burning from within with fire that is ready to consume the entire nation fast. Through the hasty announcements, the regime inadvertently advertised to the world that it doesn’t control the Afar region. This is also true throughout the entire country.

Every action the government takes now is strictly designed to elongate its life. In the West, the regime uprooted over 70,000 Gambellans from their villages destroying their way of life. The illegitimate genocidal regime has done this in every territory in Ethiopia. The genocides in Gambella and Ogaden are recorded in detail with evidences by major humanitarian organizations.

Ethiopia has seen consistent growth in its tourism industry for decades. This will definitely damage it. The minority regime has managed to stay in power by oppressing the various nationalities that it wants to label terrorist now. All these people are doing is demand their rights. However, instead of resolving the internal issues peacefully the regime resorted to force. In time, the rebellion has gathered enough momentum and it is ready to engulf the nation. The minority regime, fully aware it can no longer contain it, is trying desperate approaches such as labeling the entire nation terrorist. Individuals that oppose the regime are labeled terrorist and tried. The Diaspora is not spared because the regime makes it a point to sentence them in absentia.

This is a regime on the brink. Certainly, tourism needs peace to flourish and in Ethiopia, peace is dissipating like water in the desert sand. The regime’s acceptance by Ethiopians and people in the region is almost nonexistent. People are anticipating when and how the big shoe will drop. In this climate it is very difficult to commit to any investment in Ethiopia and certainly those that have money are sending their hard currency abroad because they are not certain of the future. This is the reason why it is easy to predict the fall of the minority regime eminent. That is why the former Ambassador Herman Cohen said that the hegemonic minority rule of the Tigray People’s Liberation Front (TPLF) is difficult to sustain, as Ethiopians are demanding freedom and democracy.

It is ironic a terrorist regime is trying to label Eritreans, the Somalis and the entire Ethiopian population terrorists with fabricated trumped charges. By doing so the regime is asking the international community for a mandate to rule with iron fist as a king maker of the region. This is also clear evidence that this futile ambition has put the regime at odds with all the people in the region. One thing the regime has done clearly is that it is challenging the publics of the region with blood in every turn. Hence, it is crucial for the people of Ethiopia, Somalia and Eritrea to come together and rid of the vermin finally. And I am certain this will happen soon because the people of the region are saying enough to the genocidal, illegitimate regime of Meles Zenawi. In order to hasten his demise and to help end the little Batustans he created, it is everyone’s responsibility to stop cooperating with this criminal and end his reign before more harm could be done.

Tags: Ethiopia : Tourism is Dangerous in Ethiopia Thanks to Meles Zenawi