Ethiopia: The regime is in tatters 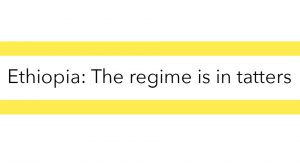 The New Year has brought change to the Horn of Africa region, long beleaguered by conflict and strife. But for some reason, the minority regime in Ethiopia seems antsy-and itching for more violence and turmoil.

It seems to thrive when the neighborhood is on fire. It must be running out of ways to get the attention of the international community (donor community) which has finally awoken and seen how its good will and support for the regime have been squandered. Once again, in addition to its usual tantrums, the regime is now recycling its childish propaganda ploys and resorted to making wild accusations, hurling unsubstantiated allegations, distorting and misrepresenting issues with a barrage of articles and reports. These tired old deceptive stratagems have been employed to malign Eritrea in the past, and now it seems the regime has added Egypt to its hit list. For the most part, it is better to ignore the regime when it’s in one of its panic modes.

The cuddling of the regime and refusal to take punitive actions against it as it violated international law, massacred its own people and threatened to destabilize the Horn region has led to this ominous situation we see in Ethiopia today. Its erratic behaviors, its hostility and belligerence have become more evident and its handlers have noticed. When the regime finds itself with its back against the wall, it lashes out with a wimpy cry for help, usually through a series of articles and long winded “cut and paste” analysis. The latest incoherent production is by one of its favored scribes, Haftu Gebregziabher, entitled “Africa: Alert-Red Sea Fury Reaches Sharp Peak” this week on the official English daily paper of the regime; “The Ethiopian Herald”.

So what triggered the anxiety attack this time? Some believe it has to do with H.E. President Isaias Afwerki’s visit to Egypt. But it is not. The real reason for the panicked writing is to divert attention away from its domestic problems, from which it has seen no reprieve for almost three years now. The regime is also reeling from the political blunder it made last week by rescinding a statement it made about releasing political prisoners, shocking its own people and the international community that was quick to applaud its vacuous statement. Jeffrey Smith and Mohammed Adebo in an 11 January 2018 Foreign Policy article, “Ethiopia Is Falling Apart”, wrote about the regime’s latest diplomatic and political faux pas:

“…The outpouring of optimism did not last long. Within hours, an aide to Desalegn clarified the prime minister’s remarks, saying that “mistranslation” by the media was to blame for the confusion….”

How typical…regime always blames others for its own mistakes. That story is still being played out, in the meantime, let us take a look at what Aite Haftu is trying to say with his latest piece. He writes:

“…The political crisis along the Red Sea seems to have reached to its peak with the worsening crisis in Yemen, the ISIS militant’s new base in Sinai and Libya, the intervention of Egyptian military commanders to Sawa Military Base in Eritrea and continued Saudi-led forces coalition operation in Yemen…”

Typical of someone that wants to deceive his or her readers… padding the story with some factual content and then, boom… insert the lie. Yes, the situation in Yemen is grim, but I don’t know that ISIS has a “new base” in Sinai or Libya. Ditto for the story about “Egyptian military commanders” in Eritrea. It is a flat out lie, manufactured by the regime in Ethiopia. Seems the regime wants in-is not comfortable with its pronounced “neutrality”. It wasn’t to be included in the “coalition”, but wants the US or Israel to facilitate an invitation-as if it has anything worthwhile contribute. The regime, isolated from its own people is now facing international condemnation-it seems the chickens are finally coming home to roost…

More importantly, Aite Habtu’s concerns are misplaced, as the only political crisis that warrants sounding the alarm on is, in Ethiopia. The two-year long nationwide Ethiopian protests saw the killings of hundreds of protesters in the Oromia and Somali regions, the detention of thousands, and the displacement of over a million people from their homes and villages. Women and children have been brutally forced out of their homes, and are languishing in makeshift camps all over Ethiopia…the situation is exacerbating Ethiopia’s never ending humanitarian emergencies, and further pauperization of Ethiopian society. Ethiopia is on the brink and it is now the biggest threat to peace, stability and security in the region.

Pray tell us who they are… Seriously, nobody’s eyes and ears are ringing …of course with the exception of the minority regime and its hired scribes at Menelik Palace. But no doubt, Aite cialHaftu is flabbergasted by the things he has conjured up in his own head and so the blabbering continues. He writes:

“…the Eritrean government could not control all areas of the Red Sea in its territory. It is easy for those pirates, insurgent groups and militants from Sinai and Libya and/or Saudi Arabia backed forces to control some parts out of this area. And this could be another means of destabilizing the rdiaegion and Ethiopia in particular, the great power and relatively stabilized country in the region…It is great danger to Ethiopia if it could be used for the expansion of Arab Islamization Project. The Eritrean regime had been training Al-Shabaab. Egypt has been trying to use the rift to get access to the Horn of Africa region to weaken Ethiopia…”

Ethiopia is no position to talk about the Red Sea and what Eritrea is, or is not doing. As for Ethiopia being a great power? Really?

Let us see what Jeffrey Smith and Mohammed Ademo have to say about that:

“…Following three years of escalating anti-government protests — mostly by the Oromo ethnic group and to an extent the Amhara, who together comprise two-thirds of the country’s 100 million people — Ethiopia can no longer afford to ignore demands for political reform. For years, the regime has sacrificed respect for basic political rights and civil liberties on the altar of economic growth. And its claims of a rapidly growing economy have always been dubious at best. The status quo can no longer hold… This image of stability has been cultivated by well-oiled lobbyists in Washington and by an army of social media trolls on the government payroll. However, despite the outward veneer of growth and stability, all is not well in Ethiopia… The country is also struggling to mitigate the effects of massive youth unemployment, high public debt, rising inflation, and a shortage of foreign currency. The economic woes that have beleaguered Ethiopia have fueled the increasing unrest…”

So much for Ethiopia being the stabilized country in the region… what drivel!

The truth is that Ethiopia’s lawlessness is the only threat to the region and contributing to its insecurity. Ethiopia’s refusal to abide by agreements it has signed, its continued occupation of sovereign Eritrean territories, including Badme for the last 15 years in violation of the Algiers Agreements, the African Union and UN Charters and international law is the elephant in the room.

Ethiopia’s invasion and occupation of Somalia that has created the greatest humanitarian emergency still plaguing the nation today. Ethiopia’s refusal to relinquish Chairmanship of The Intergovernmental Authority on Development (IGAD) for 8 years and using the regional organization as an extension of its Foreign Ministry, and fleecing donors with fake mediation between warring parties in South Sudan, its corruption of the African Union and its organs to advance external agendas against member states are all a matter of public. The minority regime in Ethiopia is now being held to account for its crimes in the region…pointing fingers at others will not absolve it of its international crimes.

Aite Habtu must not be getting the UN Somalia Eritrea Monitoring Group’s reports, because if he had them, he would know that, in five consecutive reports to the UN Security Council, the SEMG has said that it had found NO evidence to support allegations of Eritrea’s support for Al Shabbab. He must also know that there has NEVER been any independently verifiable evidence to support allegations manufactured by Ethiopia and its handlers in engineering the illegal, unjust and unfair sanctions. Habtu’s use of phrases like “the Arab Islamization Project” is quite transparent… the fearmongering is targeted at the US and Israel. “The Arab Islamization Project” is not a threat to an imploding Ethiopia-its problems are internal. It can stop pointing fingers at Eritrea and others in the region and take stock of its own beleaguered state.

Neither will its lies and deliberate misinformation…

The rule of law must prevail over the law of the jungle!

Tags: Ethiopia: The regime is in tatters