The tale of Eritrea’s first major miner, Nevsun, which has had mixed fortunes this year and gold explorer, Andiamo Exploration, whose chairman has been a long time believer in the country’s mineral potential. 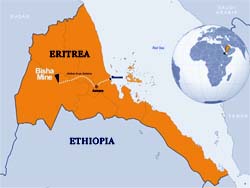 Two interesting presentations today at a Mining Journal Investor Seminar in London – one from an already operating, dividend-paying, miner in Eritrea with a remarkably good earnings profile and the other from a very early stage explorer looking for gold and VMS (Volcanic Massive Sulphide) copper-gold orebodies along the same trend.

The first of these will be obvious to anyone who follows activity in this remarkably prospective part of north-eastern Africa as it operates the only significant mine in the country – Nevsun Resources with its VMS-hosted Bisha open pit gold and base metals operation – which in a year’s time is due to transition into a high grade copper mine with gold and silver credits, and then will later on become a major zinc producer with copper, gold and silver as byproducts. The other is unknown to most as it is still a private UK company, without even a website as yet – Andiamo Exploration – the love child of Tim Williams who has been an Eritrea mineral-potential enthusiast ever since he was an exploration geologist there a couple of decades ago.

But let’s start with Nevsun – which had been a great money earner for its shareholders up until early February this year when its stock price was decimated – or rather ‘fell off a cliff’ as VP Business Development Scott Trebilcock put it in his presentation today. The reason – operating results were showing that the ore tonnages in the gold-rich open pit oxide section, as initially modelled, were not consistent with operating results – put simply that some of the anticipated ore proved to be waste – and the company was forced to cut its gold output target for the year in half – to a still respectable 190,000 to 212,000 ounces from a reserve amounting to 1.5 million tonnes grading 5.1 g/tonne. (see Mineweb article Missing oxide ore sees Nevsun cut 2012 gold output guidance in half). Nevsun’s stock almost halved on the announcement and has drifted back further since along with the froth falling off the gold and base metals markets.

In chopping Nevsun’s share price though, what the investors do not seem to have taken into account is that Bisha’s gold production is, in fact, only a small part of the overall financial equation for the project. It is actually a base metals project with a gold kick-starter. Its peak earnings will be reached when it becomes primarily a high grade copper miner and will be achieved in 2014 and 2015. It then falls back, on the current plan, as it becomes mainly a zinc producer (with byproduct copper, gold and silver), for much of the rest of its mine life up until 2023 – assuming it doesn’t extend its resource base in the meantime. The gold in the leached out oxide cap has already enabled it to pay back capital costs and the company is an enormous rarity in the junior producer sector in paying an annual 10 cent dividend – almost a 3% yield at the current share price. Even the gold majors can’t match that kind of return these days.

Indeed Nevsun’s cash accumulation profile over the next decade is substantial – no small wonder that recently a leading Toronto analyst recommended Nevsun stock as a bottom-fishing opportunity. The market invariably over-reacts on what it perceives as bad news – particularly with regard to missing, or non-existent, gold (Bre-X remains firmly fixed in investor memories!). But Nevsun is no Bre-X. There is no suspicion of fraud here – just an admittedly significant misinterpretation in the assessment, by third party consultants, of overall ore tonnages from drilling results where core recoveries were poor in areas of highly fractured and broken up oxide rocks. But in the overall profit pattern for the mine the gold is a relatively small component in mine-life profit and revenue projections.

The company remains completely confident that the same assessment problems will not apply in the far more competent sulphide zones where core recoveries were much higher.

Meanwhile Nevsun, which owns 60% of the local operating company with the balance being owned by the Eritrean state mining company, ENAMCO, is also looking at other opportunities within its mining area to extend its resource – and in a smaller version of Bisha, a little to the south at Harema, there does seem to be the potential for the mining of another gold-rich cap over a VMS gold/copper prospect, which could be mined at low cost and trucked across and run through the Bisha plant. There is also a highly prospective zone to the northwest of the mine where a resource estimate is expected by the end of the year.

Nevsun announces its Q1 results on May 9th, and these will be followed with particular interest, particularly inasmuch as they will give the next official guidance on whether this year’s downwardly revised gold output target will be achieved – or perhaps exceeded.

The other presentation on an Eritrean project came from Tim Williams, who left what might be considered a secure, and remunerative job in Ernst & Young’s mining department to set up junior explorer Andiamo Exploration, which is wholly concentrated on ground to the southwest of Bisha along the same general geological trend. Andiamo (lets go in Italian) is concentrating on looking for VMS gold-copper orebodies with gold-rich oxide caps which can be easily and cheaply mined (like Bisha’s gold-rich cap) and also for shear zone hosted gold deposits. The area over which it has its exploration licence has a strong history of artisanal mining and parts of it are dotted with these local miners’ small pits – a pretty good indication of a strong gold prospect.

Williams has, ever since he was an exploration geologist working in the region, wanted to go back there and exploit what he sees as areas of huge mineral potential. Initially the political environment in Eritrea was not conducive to foreign investment, but now it is considered one of the best mining jurisdictions in Africa and is virtually corruption-free, although Williams reckons the state take from a mining operation may rule out the development by a junior of all but the best projects – marginal ones wouldn’t be worth their while. The writer has known Williams (no relation) for many years and he has never wavered in his enthusiasm for Eritrea as a great mining destination and a desire to get back there once he had achieved the financial wherewithal to set up a project like Andiamo.

Andiamo is still a private company, and if Williams, who is chairman, has his way, as he told Mineweb, will remain so, but some of the institutional shareholders he has brought on board may force his hand as they can only value a private company at zero in their books. They need a stock price quote more than the company itself does as Williams reckons the costs and management time involved in first organising an IPO, and then the paperwork and management time involved in meeting compliance regulations would mean management has to take its eye off in-field operational matters. Very significant for a small explorer with limited management personnel.

Principal Andiamo shareholders are Williams and Seife Berhe, the Eritrea country manager and Eritrean national, while the remainder is held by institutional and high-worth private investors. It has raised $7.5 million to date, but the burn rate and costs incurred so far have left it with only around $1 million in the kitty, so exploration is currently proceeding cautiously and more money will need to be raised before sufficient drilling can be undertaken to come up with some kind of compliant mineral resource estimate. The company has a small, but impressive, board of directors encompassing great experience in African exploration and in finding significant VMS projects.

Anyway, Andiamo, has a suite of highly prospective targets, some of which have already provided some excellent indications for meeting the company’s exploration criteria – both VMS and shear hosted – most of these being near surface exposures with soil sampling, trenching and initial shallow exploration drilling coming up with some impressive gold values – as well as some significant base metals showings. The next stage will be the raising of more capital so that the company can continue investigating the key targets – not necessarily an easy task in the current gold price environment.

Meanwhile today, but not presenting at the seminar, Australian explorer Chalice Gold, which is also exploring in the same areas – its Mogoraib prospect is some 10 km to the north of Bisha – has announced it has entered into a jv with ENAMCO (itself largely financed by its revenues from Bisha). The JV, which incorporates the company’s Mogoraib North and Hurum exploration areas will be owned 60 per cent by Chalice and 40 per cent by ENAMCO (including a 10 per cent free carried interest) – similar terms to that negotiated between Nevsun and the Eritrean Government and for Chalice’s flagship Koka gold operation – and will be funded in accordance with each party’s paid participating interest, being two thirds Chalice and one third ENAMCO.

In consideration for ENAMCO acquiring its 30 per cent paid participating interest in the JV, subject to audit, ENAMCO will sole fund an estimated ca US$750,000 of exploration expenditures from 1 March 2012. This represents one third of historical project-to-date expenditures incurred at Chalice’s Mogoraib North and Hurum prospects.

Chalice is currently developing, with ENAMCO, the high grade, open pit Koka Gold Deposit. This is estimated to host a JORC and NI 43-101 compliant Probable Mineral Reserve of 4.6 million tonnes with a grade of 5.1 g/t gold, containing 760,000 ounces.

The low cash operating cost of US $338/oz gold is expected to be in the lowest quartile of global gold mine production costs. Planned mine production will average 104,000 gold ounces per year over a seven year mine life.

The Koka Gold Deposit lies within the 547 square kilometre Zara block of Exploration Licences. Chalice’s Hurum license lies along strike from the Zara licences, and the Mogoraib North Licence is, as noted above, proximal to Nevsun’s Bisha mine.

Much of these highly prospective Eritrean gold and base metals-bearing trends are still very underexplored and the prospect for Eritrea, with a population of around 5.2 million people, becoming a significant precious and base metals producer remains largely untapped, but is extremely promising given the seemingly excellent relations between the government and foreign mining and exploration companies to date despite some slightly onerous participation terms.