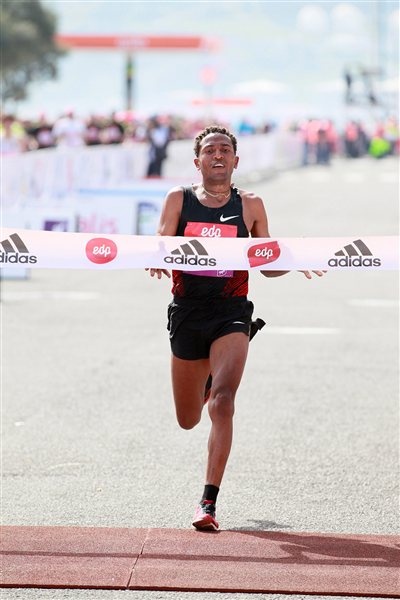 There were high expectations from Tadese’s appearance, because the weather wasn’t as bad as predicted but still quite warm. At the race time, the temperature reach 23 ºC with moderate winds.

From the start Tadese ran in the front, with John Mwangangi (2nd in 2011 Lisbon Half Marathon and Valencia Half Marathon 2010 and 2011 winner), but always well off World record pace.

After the race, the five time IAAF World Half Marathon champion said, “I couldn’t run as fast as last year because I had a flu, and that affected me. I hope I can do better next year, if I can compete here, again.”

After Tadese and Mwangangi, another Kenyan, Lucas Rotich, finished the podium 1:40 ahead of Portuguese Rui Silva, who achieved a new personal best of 1:02:40. For Silva, “The most difficult thing was being alone almost from the beginning. Tadese and company soon went to the front, pacing the race to a level hard for my current shape. So I ran almost alone to finish with a personal best.”

The high temperature proved to be harder than expected and several athlets didn’t finish.

Among the first ten finishers, seven of them were born in Africa, two in Portugal (Silva and Manuel Damião, 2012 Portuguese road race and cross-country champion), and one Argentinean.

Latvia’s Jelena Prokopcuka, a Marathon standout who lives in the south of Portugal, finished fifth ahead of Kenyan Rita Jeptoo and the Portuguese Ana Dulce Felix, who crossed the line in 1:11:18. Last year she was second in 1:08:33.

“This was a great race,” said Flanagan. “I’m very pleased for this opportunity, hoping this can give me more confidence for this summer in London, in the Olympic Marathon.”

Felix wasn’t disappointed. “Last year at this time I was preparing for the Vienna Marathon, in another level of shape. This year, our work is focused on the Olympic marathon so I ran slower than 2011.”

Overall, it was a spectacular and well organised race with more than 38,000 runners crossing the bridge over the Tagus river.

Antonio Manuel Fernandes for the IAAF