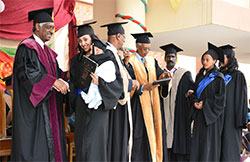 It has been twenty seven years since Eritrea emerged from a lengthy war of liberation that claimed the lives of sixty five thousand women and men and displaced hundreds of thousands of women and men.

Globally, women have less educational opportunities to improve their lives. They are often prevented from meaningful participation in education. In Eritrea, all citizens are encouraged to learn irrespective of their age, gender and ethnicity through formal and non-formal means. The government opens up boarding schools and mobile schools in remote areas to reach the nomadic and semi-nomadic communities.

The old cultural factors that limit women’s rights and participation in education were effectively challenged. Intensive awareness campaigns have been conducted to protect girls from early marriage. According to Article 522, for example, “A man and a woman who have not both attained the full age of eighteen years may not enter a contract of marriage.” This is done to give young girls protection.

At independence, gender disparity in education was horrific at all levels of the education system. Significant differences exist between boys and girls in school enrolment. Women’s participation in education decreases as they move up the ladder from elementary to secondary and then to higher education. To address such kind of disorder the government gives top priority to the expansion of educational opportunities for all. As a result of the nationwide and cross sector coordination, female gender parity with males has been showing progress at all levels, from elementary all the way up-to tertiary level of education. The Government has drafted a gender policy and strategy in recognition of the fact that sustainable development cannot be realized without the full and equal participation of women at all levels of education. Gender equality is a nail on which the entire national activity hangs.

Investment on the health and education of women and girls is regarded as the key to development. Educated and healthy women are more able to engage in productive activities and also invest in the education of their own children. Given that women are half of the population and economic potential, Eritrea gives equal opportunity to both men and women with regards to education. The centrality of gender equality, women’s empowerment and the realization of women’s rights in achieving sustainable development has been increasingly recognized.

This recognition is evident in a number of documents issued by various international agreements entered by the government. Eritrea recognizes that gender equality and women’s empowerment are important for sustainable development. The Government of Eritrea made a strong commitment to integrate gender into policy and strategic planning instruments. The government reaffirms its commitment to ensure women’s equal rights and access to education. Investment in girls’ education may well be the highest return investment available in the developing world. Marginalization and exclusion of women from education is the greatest threat and hindrance to social, economic and political development.

Linking gender equality and sustainable development is important for several reasons. In addition to the known development imperative, it is a moral and ethical imperative to give women equal opportunity. Achieving gender equality is recognizing the human rights and dignity of women and it’s a central requirement of a just and sustainable development. The issue of women is a major social issue. As described in the national charter of Eritrea, a society that does not respect the rights and equality of women cannot be a truly liberated society. In order for Eritrea to be a country where both genders live in equality, the doors of education should be opened to all. The education of women who constitute half of the Eritrean human resource is crucial for the country’s advancement in all fields. Eritrea is one of the few countries which have recorded successful results in education and gender related areas envisioned by the Millennium Development Goals.

Goal 5 of the sustainable development goals seeks to achieve gender equality and empower all women and girls by 2030. Prosperity without equality is not worth celebrating. Women should not be left behind. Development should not be measured only by GDP. Per capital GDP has perhaps been the supreme yardstick for evaluating national success, but emerging studies are calling for supplementing this or even replacing GDP with GDH – gross domestic happiness. After all, what do people want? People do want production but not at the expense of satisfaction and happiness. Economic growth is only the means not the end. Any level of economic prosperity unsupported by equality and justice would bring happiness to none, except the very few.

Eritrea has been able to eliminate gender disparities in primary, secondary and tertiary education. Participation rates of women in higher education have increased. The rising enrollment of women in Eritrean colleges is an indication that successful work has been done at various sectors. It is an indication of the elimination or reduction of early marriage that has often kept girls out of school. It is also an indication of the change the Eritrean society has undergone in terms of understanding the value of education. The rise in women’s enrollment is the result of the prevalence of social justice in Eritrea. Social justice means equal distribution of resources, having equal rights and granting social and economic benefits to the least advantaged sections of the society. So in all respects equal access to education is a telling indicator of women’s status in a given society.

The National Policy on Gender aims to have a society in Eritrea where girls and boys, women and men have equal opportunities, rights, benefits and obligations in all sectors and areas of life in a way that enable them to achieve sustainable livelihood. Vocational training that was in the past dominated by men has been penetrated by women. In the current academic year, out of the approximately 14,000 members of the 32nd round who are attending their 12th grade, 50.5% are women. Similarly, at the Center for Vocational Training, out of the 2142 students half are women.

The ratio of women in Eritrea’s institutions of higher education has been rising with each passing year. Eritrea has achieved tremendous success in closing the gender gap in tertiary education. Women’s enrolment at Adi Keih College of Business and Social Sciences across the years, as the chart shows, epitomizes women’s level of participation in all of Eritrea’s institutions of higher education.

The task of nation building requires the participation of all citizens regardless of their gender. The participation of women in higher education is vital for the transformation and development of the country. That is why the Government of Eritrea upholds policies to increase women’s enrollment in colleges.

Women with higher education are expected to play proactive roles and present themselves in the forefront of the battle to eliminate any form of discrimination. Eritrea’s achievement in the area of education and equality is great. But we still have a long way to go to make our aspirations a reality.