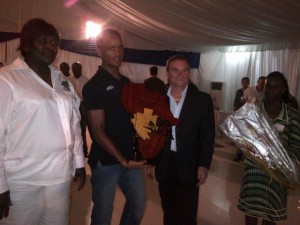 Eritrean  Natnael Berhane, winner of the Tour of Algeria in 2012, was named “African Cyclist of the Year 2012” by a jury race sponsored by the Tropical Amissa Bongo of Gabon and chaired by former champion Bernard Hinault. “Natnael Berhane marked the spirits for its regularity,” the statement said, citing his “three league titles continental Africa in early November in Ouagadougou (elite road race and hopes as well as against the clock by teams)” his victory in the Tour of Algeria with two stage wins, especially his victory at the classic French amateur Tour of Chablais. Berhane, 22 January, won the title with 72 points against 41 points for South Africa’s Reinhardt Janse Van Rensburg and 39 points for the Moroccan Adil Jelloul. “Twelve of the sixteen members of the jury – composed of players Cycling – placed him in the first place their vote,” according to the text. Natnael Berhane make his professional debut in 2013 with Europcar. Both riders Algerian members of GS Petroleum, Azzedine Laagab and Youcef Reguigui, included in the list of athletes nominated for the award for best African cyclist of the year.