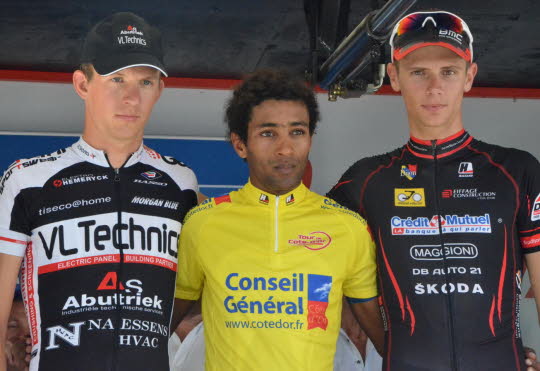 Tour de Côte-d’Or 2013 will keep its promises to the end. After the first two breathless days, the fourth and last stage run under a blazing sun between Dijon and Saint-Jean-de-Losne, very nearly upset the final rankings.

Because yesterday Merhawi Kudus quickly squandered two dangerous clients. Belgian CL Technics Abutriek, Dimitri Claeys and Quentin Bernier (SCO Dijon), respectively 1’03” and 1’02” of young African overall. Turn only against, Claeys and Bernier formed a duo, then returned at the cost of great effort on breakaway of five (which appeared in another Dijon, Melvin Rullière) part from the rise of Saussy. The group, which eventually will have ten men took the wide (up to 2’40” lead less than 50 km from the finish). Quentin Bernier then virtual leader.
Kudus: “I knew it was dangerous”

The blow was so perfect for SCO Dijon. “We knew that William Barillot (2nd overall) would be monitored. So the objective was that I slipped in a shot to try to bend the team of the yellow jersey, “explained Quentin Bernier.

“When Claeys and Bernier came out, I did not panic. But then I realized that it was very dangerous, “admitted his side Merhawi Kudus. “My teammates were then shot a huge job. It was very difficult to narrow the gap. I was a little nervous, of course. ”

Because at the time of entering the final circuit in Saint-Jean-de-Losne, the gap was even greater than two minutes. The World Cycling Centre received while using several teams (including Aix-en-Provence, Villeneuve and Rouen), trying a little later, to promote a sprint finish. The gap began to melt.
Change in strategy

At the front, Claeys, a former professional cyclist, then changed strategy. “I wanted to win it all. But two laps from the end, I realized that it would be too short for the general … I finally done everything to win the stage. I did not want to go home without flowers. ”

A little more than a lap to go, he pressed a little harder on the pedals. None of his breakaway companions only managed to follow him, not even three riders VC Toucy or Bernier had not worked hard, thinking hard as iron yellow jersey. “When I realized it was over, I cracked in the head and I no longer felt able to pick up again,” he admitted.

Claeys finally imposed alone, ending the peloton on the heels of the group. Merhawi Kudus could then blow while Guillaume Barillot maintained its second place overall for a small second on the Belgian rider. A small consolation for Dijon, disappointed that his victory escapes. “We had managed to Quentin before, except that behind teams rolled then they had nothing to play,” he slipped. “Finishing second? It’s good to do this instead of the TCO, but only victory counts. I am disappointed to have stuck Kudus Saturday but apparently outsized. “Maybe in a few years, he can say he finished second behind a crack of world cycling.