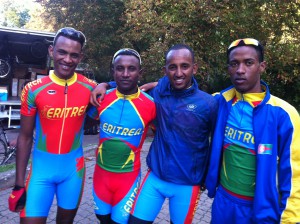 Asmara, 9 January – Finalizing its preparation as of the 23rd of December, the Eritrean Cycling Team left today to take part in Tour de Gabon due to be conducted from 14 to 20 this month. Members of the team coached by Mussie Asehel include cyclists of under 23age like Meron Amanuel, Meron Teshome, Tesfom Ogbamariam, Merhawi Kudus, Mekseb Debesai and Tesfai Abraha, who is member of the South African professional cycling club MTN.

Eritrean professional cyclists Meron Rusom and Jani Tewolde would represent MTN in the current Tour de Gabon, while Natnael Berhane would race for the French club Europe-Kar. Eritrean MTN cyclist Firekalsi Debesai and Daniel Teklehaimanot, representing his Australian team, would not take part in Tour de Gabon as they are heading for other tournaments, according to reports.

Mussie Asehel explained that the team is in good condition, and that it looks forward to ensuring a doorway to run for the under 23 world cycling tournament on the basis of demonstrating its potential in the current one.

The competition involves a total distance of 944 Km, covering 283 Km. more in contrast with that of last year’s, and would be extended within the territories of two countries, thus encompassing a competition along the streets of the Cameroonian capital, Yaoundé. Moreover, more than 90 cyclists representing 21 teams are expected to take part in the longest African cycling tournament in which no black competitor has ever won to-date.

It is to be recalled that Eritrean Meron Rusom stood second in Tour de Gabon following French Antonio Charito last year, while Daniel Teklehaimanot, Natnael Berhane and Moroccan Tarikh Chafi are record holders in the history of the tournament.