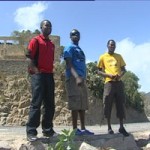 Eritrea would soon be competitive in world cycling race: Journalists from Super Sport TV
Asmara, 14 November 2011 –– A group of journalists from Super Sport Television Station who observed the seventh African Continental Cycling Championship held in Asmara said that Eritrea would soon be competitive in world cycling race.
The group who came to cover the race told Erina that Eritrea was able to nurture a number of athletes who can make names for both themselves and their country thanks to the substantial investment the nation has made in the development of sports over the past 20 years. In cycling race in particular, Eritrea is one of the competitive countries which is expected to reach highest stage in the world, the group added.
The group of journalists comprises Mr. James Wokaaba, Louis Maina and Daniel Kamau, all three from Kenya, said that they have witnessed that the Eritrean people take pride in their culture, history and identity. They also voiced deep impression with the spectators’ enthusiasm saying it was for the first time that the group observed such fans.
They further lauded the preparations Eritrea made to host the 7th African Championship and commended the Eritrean people’s hospitality, as well as the prevailing peace and stability in the country. The members of the group further expressed their desire to spend their vacation in Eritrea.