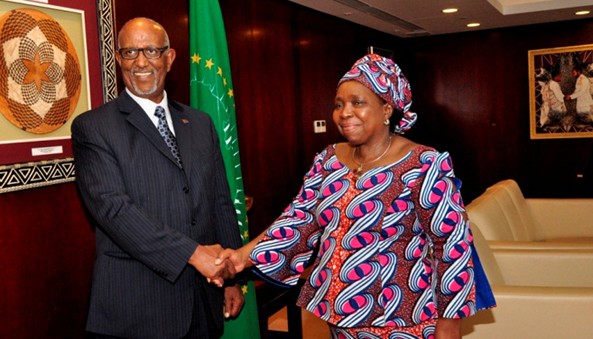 at the 24th summit of theorganization held in Addis Ababa from the 23rd through 31st of January.

The delegation, which was led by Eritrea’s permanent AU representative in Addis Ababa – Ambassador Araya Desta appeals for a full implementation of the decisions passed by the Eritrean and Ethiopian Boarder Commission and that the organization has to pressure Ethiopia to pull its troops from what has been declared as Eritrea’s sovereign territory.

According to the Ethiopian newspaper The Reporter,  Ethiopia responded to the call through its representative – the Deputy Minister of Foreign Affairs – Ambassador Berhane Gebrekristos saying that his country and Eritrea have to go back to the negotiating table for talks before the delimitation process.

Ambassador Gebrekristos also affirmed that his Prime Minister – Halemariam Desalegn is willing to travel to Asmara and talk with his Eritrean counterpart regarding the issue.

It is, however, proper and correct for dialogue to take place before an arbitration decision but Eritrea’s argument was, the call for ‘dialogue and bilateral talks’ by the party that is dissatisfied with the ‘final and binding’ arbitration decision must not be accepted and entertained.

Ambassador Gebrekristos, on the other hand, cited AU’s reluctant stance on Eritrea and the two sanctions imposed by the United Nations Security Council as indications of Eritrea’s noncompliance.

AU’s current revolving chairman – Zimbabwe’s 90-year-old President, Robert Mugabe heard the deliberations by the two countries and pleaded with them to avoid foreign intervention in dealing with their conflict.

Intervention by H.E. Ambassador Araya Desta
Permanent Representative of the State of Eritrea
to the African Union and UN Economic Commission for Africa

Mr. Chairman, thank you for giving me this opportunity.

Allow me, at the outset, to convey to the august Assembly the warm greetings of H.E. Isaias Afwerki, the President of the State of Eritrea.

As clearly reflected in the Report, our continent is facing multiple security challenges. The rise of extremism, terrorism and human trafficking in many part of Africa is a source of grave concern.

Eritrea believes that it is important to strengthen existing and create new mechanisms of cooperation among countries of the region as well as the relevant regional and international organizations.

On its part, Eritrea plays an active role in promoting peace and security in the Horn of Africa and the Red Sea Regions. Eritrea has been actively working for peaceful resolution of conflicts, and it has firmly and consistently been combating terrorism, extremism, piracy, human trafficking and other scourges bedeviling our continent.

On the Situation Between Eritrea-Ethiopia

One of the major factors hindering the promotion of peace and security in the Horn of Africa Region is the continued occupation of sovereign Eritrean territories. It has been more than 14 years since the Algiers Agreement was signed; and about 13 and 7 years respectively, since the EEBC awarded its Final and Binding Delimitation and Demarcation Decisions.

My Delegation wishes to use this opportunity to reiterate its call on the AU, as one of the Guarantors of the Algiers Agreement, to urge our neighbor to abide by its treaty obligations and unconditionally withdraw from sovereign Eritrean territory, including the town of Badme.

I assure you that the end of the occupation will pave the way for the normalization of relations between the two countries, and will have a major impact in stabilizing the region.

On the Situation in South Sudan

The Member States of the Union and the international community need to strengthen their support to the People and Government of South Sudan in order for the country push forward its nation building agenda and overcome the challenges facing the process. It is also crucial that the sovereignty of South Sudan be respected.

In conclusion, I would like to reaffirm Eritrea’s commitment to contribute its share for the pacific resolution of conflicts, and for the creation of an environment conducive for the promotion of cooperation in the Horn of African Region and across the continent.