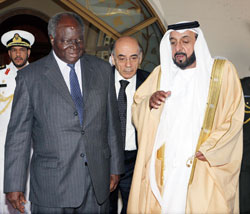 By Standard Team and PPS

A bitter Eritrea took its showdown with Kenya to the United Nations, demanding that Nairobi be punished for “defamatory” accusations over alleged arms shipments to Al Shabaab.

Kenya has maintained that it has credible information that Eritrea was arming the Al Qaeda-linked militia, and that denials by Asmara are not enough.

This came even as Kenya — which sent troops into Somalia in mid-October in hot pursuit of the militants accused of violations within its territory — struck successes in its diplomatic charm offensive.

President Kibaki is received by President Zayed Al Nahyan of the United Arab Emirates and ruler of Abu Dhabi. Kibaki is on a State Visit of the UAE to win support in the fight against the Al Shabaab militants. Photo: PPS

On Monday, President Kibaki agreed a diplomatic deal in the Arab world when the United Arab Emirates (UAE) pledged its support for Operation Linda Nchi.

And in Washington, Kenya’s UN Permanent Representative in New York formally approached the Obama administration for US backing.

President Kibaki got the support of UAE emir and ruler of Abu Dhabi, Sheikh Khalifa Bin Zayed Al Nahyan, as Kenya stepped up what observers consider to be crucial support from the Arab world.

Kibaki and Al Nahyan said resolution of the Somalia conflict and stabilisation of the country was a priority ahead of its reconstruction.

Meeting in Abu Dhabi, UAE, Kibaki and Al Nahyan underscored their joint support for post-conflict Somalia, a country that has not had a stable central government for the past 20 years.

“We are following closely what is happening in Somalia and will support efforts to normalise Somalia and give hope to the country,” said Al Nahyan.

On his part, Kibaki said Kenya’s current mission was out of the desire to find a solution that could bring about lasting peace to Somalia and the region.

In the US, Ambassador Macharia Kamau made a rare appearance at Capitol Hill, the seat of congressional power, to make a case for Washington’s support in the drive against Al Shabaab.

“We would love to see the international community, with the US right up there, engaging in Somalia in ways in which they have not for quite a long time,” Kamau told the press in Washington DC soon after meeting members of the US Congress.

“We would like to see the US and the international community taking advantage of basically what Kenya is doing, which is putting troops on the ground, taking risks that need to be taken to achieve the goals we all say need to be achieved, which is to bring peace and security to Somalia,” said Kamau.

Meanwhile, Pentagon officials reiterated that the US was monitoring the Kenyan incursion but not providing assistance.

Eritrea insisted they were entitled to redress for alleged defamation over accusations that it had impugned its international reputation.

The letter to Jose Filipe Morales Cabral, the President of the Security Council dated November 16, accused Kenya of refusing to solve the matter bilaterally following an Eritrean request.

Early this month, Foreign Affairs minister Moses Wetangula summoned Mr Beyene Russom, the Eritrean Ambassador in Nairobi and threatened a ‘review’ of relations with the Red Sea state following claims that planeloads of arms had been delivered to Baidoa, in Somalia, for the Al Shabaab.

On Monday, it emerged that Eritrea was confident that an investigation would find Kenya’s accusations to be baseless.

“If, as Eritrea confidently believes, the investigation determines that there is no basis whatsoever to the very serious and harmful accusations by the government of Kenya, Eritrea calls on the Security Council to take action that would redress the injustice suffered by the people and government of Eritrea,” Saleh said in the letter.

“Defamation of a member state of the United Nations should not be indulged in with impunity and must not be tolerated, given its negative implications for regional peace and security,” he said.

Eritrea’s envoy to the African Union said the Kenyan allegations should be publicly dismissed as a first step. “It is up to the UN Security Council to take whatever action it feels appropriate and necessary to rectify such baseless allegations and defamation of a member state,” Girma Asmerom told Reuters.

Kenyan officials have said the weapons consisted of shoulder-fired rockets, grenades and small arms munitions, and that they have been moved to areas in southern and central Somalia.

Slapped with an arms embargo, assets freeze and a travel ban for some of its officials in 2009, Eritrea faces another round of measures over charges it was aiding militants fighting to overthrow the internationally-backed Mogadishu government.

Asmara accuses Ethiopia of being behind the claims through a “frenzied campaign” to isolate and weaken its government. The neighbours fought a two-year war over disputed territory a decade ago but the frontier spat has yet to be resolved.

Scores of Ethiopian military vehicles carrying soldiers have been spotted by residents in Somalia’s frontier towns in what could be a joint attempt to flush out Al Shabaab.

Ethiopian officials, however, say they have yet to decide on deploying troops, though they are committed to a regional initiative to stabilise the lawless Horn of Africa country.