Eritrea: Strategy For Defying The Sanction 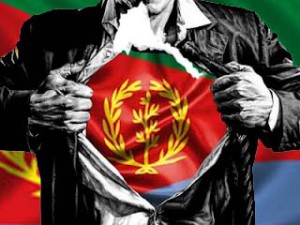 when the cyclical effect of the nature such as drought affects the country.These manifestations of defi ance are a testament to the Eritrean spirit of perseverance, and an explanation to the conceptual framework of Hade Libi Hade Hzbi. The linguistic signifi cance of the Eritrean notion of Hade Libi Hade Hzbi has the connotation of population who has one heart. It is similar to the Latin term Unum Corpus formulated by Thomas Aquinas that has the connotation of one body, and this philosophical teaching presupposes that people of a given community should relate to each other as members of the same family.

There is perhaps no clearer testimony to the recent conceptual manifestation of Hade Libi Hade Hzbi in an Eritrean culture than the complete participation of Eritrean people, inside and outside the country, in world-wide peaceful demonstration, to challenge the unjust sanction imposed on their country.

Similarly, one can recall similar action taken to avert the enemy’s aggression. When Eritrea was invaded by Weyanne, Eritreans from all walks of life, notwithstanding their differences or their geographical proximity and distance to the land, contributed immensely, and in great numbers, fi nancially and otherwise to alleviate human suffering caused by the devastation of the war. Similarly, drought and abundance, traditionally, are two paradoxical opposite aspects of nature that affects the Eritrean farmer. It is with

these two elements of nature that the Eritrean farmer has to struggle and wrestle, as it is, his harvest and livelihood. Through their cyclical effect, the elements of nature, sets the precise terms of the struggle, and in that sense it is nature, which ultimately determines whether it will be a year of bounty or famine. However, the Eritrean people never allow nature to set a limit to what human autonomy and human achievement could accomplish.

The construction of Gerset dam in Gash Barka, for instance, is a clear manifestation of combating the cyclical and natural drought by altering ones nature through sustainable environment in order to ensure food security, and implement the concept of self-suffi cient.

Armed with a slogan of Hade Libi Hade Hzbi they take on the feature of a struggle to alter nature to their advantage with human action. Thus it is from these facts and fragments of our culture that we seek to extract the constant principles of the human spirit and moral signifi cance and to make maps that point the way toward our communal

Eritrea is a complex nation founded in human spirit and human relations forged on the battlegrounds of this century. Historians put our reality of human spirit and humanrelations in context, explaining Eritreaness to themselves based on this powerful slogan of Hade Libi Hade Hzbi of remarkable depth and perception that sets high standard to modern interpretation of human relations.In the past informative teachers and philosophers have attempted to construct the compelling concept of this slogan unto numerous civilizations, however only Eritrea has carried this quest into the new century.

We Eritreans are called to protect and safeguard the nation and the people. Traditionally, the concept of familial obligations i.e. looking after your children, parents (famil obligation), relatives, or after those who are endowed with less fortune occupies a prominent place in Eritrean culture. Those who have more are called to share with those who have less. This Eritrean concept of obligation keeps the community of people together who are otherwise relegated to different status.

fundamental human relations. Of course Caritas is a Christian precept of Charity regarded by Thomas Aquinas as the “highest virtue”. This concept is similar to the Quranic teaching of Alms found in the third pillar Zakat, in the Islamic faith. Furthermore, utilita proximi could be translated as the interest of one’s neighbour or what we call in Tigrigna Bsay in its true camaraderie meaning as Halyot Bsaynet. However, only in Eritrea the word Halyot Bsaynet has quintessential meaning. In Tigrigna the word Halyot derived from Gsi or verb Haleye which connotes the utilitarian concept of loving concern of others, that is explicitly the same as Augustinian’s utilita proximi i.e. interest of one’s neighbour.

Those who have participated in the Eritrean armed struggle know by experience that Bsaynet demands self sacrifi ce. In Bsaynetnthe fundamental virtue is not the honour or power of this life, but the sacrifi ce that one endures to protect the welfare of comrades. From the perspective of Bsaynet, therefore, a position of leadership stipulates something more than political responsibility which is paying with one’s life to protect the people under your leadership. Similarly, in private life Bsaynet calls to show a loving concern as well as to protect, and safeguard the welfare of those who are under our care or those who have less or those who are less fortunate.

In Western tradition, this concept of human relations was proposed by Augustine based on charity. However, unlike the Eritrean concept of obligation that makes essentially no political or religion distinctions, the Western notion of charity initially was based on principles of Christianity. The Latin term unum corpus formulated byThomas Aquinas has the connotation

of one body, and the teaching of charity presupposes that people of a given community should relate to each other as members of the same family. Similarly, the corresponding Tigrigna saying Hade Libi Hade Hzbi has the connotation of population who has one heart.Hade and Libi are the Tigrigna nouns of one Ahaz (number) and Libi (heart) respectively.

Therefore, these terminologies represent something new in the history of the usage where Hade Libi (one heart) methodically describes the fl ow of blood that is life from one source heart. Furthermore, the linguistic usage of Hade Hzbi (one population) faithfully preserves the

equivocal meaning of multitude of people at the receiving end of the life sustaining element from one source that is one heart (hade Libi). A conceptual analysis of the compendium usage of Hade Libi Hade Hzbi, therefore, suggests a terminology to describe strong bond between people wherever they are and how different they are, and it corresponds to general human experience of love.

In conclusion words such as Libi (heart), Hzbi (population), Halyot (loving concern), Bsaynet (camaraderie), Halafnet (responsibility), evoke memory of responsibilities and sense of obligations towards our fellow human beings. They bring to our memory inevitable and inscrutable connection to our homeland that transcends human understanding.

The aforementioned words are what we have in common with our people both at home and abroad. It is because of such explanations that the Eritrean notion of Hade Libi Hade Hizbi has no diffi culty to manifest itself whenever the need arises, whether it is to fi ght famine, to challenge the unjust sanction, or to defend the nation.