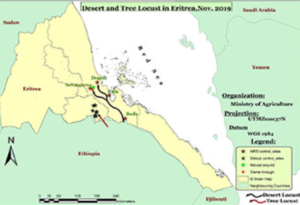 Eritrea controlled huge swarms that migrated from Ethiopia to the Southern Region and the Northern Red Sea Region between 13th-22nd November, 2019.

The swarms appeared in the Southern Region from 13th – 16th November, 2019 in the Subzones of Tsorona, Segeneyti, Mai-Ayni and in a very limited size in other Sub-zones.

Other new swarms and some swarms that flew from the Southern Region also arrived in the Northern Res Sea Region from 19th – 22nd November, 2019 in the Sub zones of Gindae, Massawa and Foro.
The locust swarms that migrated to the Northern Red Sea Region were found to be desert locusts however those that attacked the Southern Region were mostly tree locusts.

Eritrea, in both the regions, mobilized the general public and the military under the coordination of the Ministry of Agriculture and the regional administration offices to combat the huge locust swarms.

According the information from the Migratory Pests Control Unit of the Ministry, so far more than 1500 hectares of land infested with swarms of tree locusts and desert locusts were treated in both the regions.
As a result of this extra-ordinary commitment, Eritrea saved its crops and range lands with almost no or insignificant damage.

Thanks to the coordinated effort made and satisfactory supply of effective pesticides, the swarms were put under control in less than a week.

According to Ms. Selam Teclay, from the Migratory Pests Control Unit of the Ministry of Agriculture, there is still a probability of locust swarm coming from Ethiopia. For this reason, the government of Eritrea is closely surveying and monitoring the potential infestation areas.

Moreover, Ms. Selam disclosed that Eritrea is conducting the routine surveillance and control operations around its eastern coasts under the theme: We fly more than the locusts do!

It is to be noted that Eritrea is one of the frontline countries for desert locust breeding.

Source: A monthly newsletter prepared by the Ministry of Agriculture of The State of Eritrea, Issue No 18, December 2019