ERITREA: PROVE IF WE ARE ARMING AL-SHABAAB 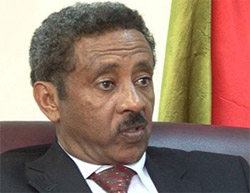 The Eritrean embassy in Nairobi says Asmara is not opposed to Kenya’s offensive in Somalia and is challenging anyone with evidence that its government is arming Al Shabaab militants to go public with it.

Ambassador Beyene Russom told Capital Newsbeat in an exclusive interview that his country has never been involved in the internal affairs of Somalia and cannot therefore arm Al Shabaab in any way.

Russom said his government supports peace in the region and “cannot undermine any efforts aimed at stabilising the war-torn country.”

“All these are bogus propaganda fabricated by Ethiopia. It is a continuation of a series of previous lies about our government,” Russom said in the interview at the Nairobi Embassy Wednesday.

Citing recent reports that his government had delivered planeloads of arms to Al Shabaab fighters in Baidoa, the ambassador said he does not understand how planes could have landed in Southern Somalia with arms yet the region was under strict surveillance since Kenya sent its troops there.

“When I heard about these allegations, I did not sleep. It worried me so much… I have held meetings and I have spoken to various government officials in Kenya both formally and informally to explain this and even a delegation from my country is planning to come.” he said.

Asmara has announced it plans to send a delegation led by Foreign Minister Osman Saleh to Nairobi to discuss the matter which the Eritrean envoy said dents the country’s image.

“These are wild accusations. They could have brought the plane down if indeed it was seen delivering arms in Baidoa. It is not possible that Eritrea can fly arms to Somalia. Not at all,” he said, fighting off the allegations he blames Ethiopia of fabricating.

During Wednesday afternoon’s interview, the envoy also dismissed allegations that he had been sending money to Al Shabaab militants in Somalia through the embassy.

“Again these are the lies they [Ethiopia] have been propagating. When I came here, I found many allegations about me, and I even went and met the President and I explained to him and I was willing to be investigated and even my bank accounts. I have never supported Al Shabaab,” he said.

“I am here to represent my government not to support criminal groups like Al Shabaab,” he said adding that “since I came to Nairobi, I have never met a single Somali group or individual, I am very careful.”

He said his country has never participated in any cross-border attacks.

“We have never bombed a country; we are not crazy to do that. How can we then send arms to Al Shabaab,” he posed, adding “even the Al Shabaab are a creation of Ethiopia which has for several years tried to destabilise our country.”

The envoy blamed Ethiopia for some of the sanctions his country is facing “because it always ensures we are excluded from IGAD meetings.”

Eritrea is faced with an arms embargo “and as such we cannot import even a single pistol for our own use as a government. I wonder how then we can have a surplus to an extent of transporting them to criminals in Somalia.”

“Whenever meetings are held where crucial issues will be discussed, and issues which we need to participate in, they turn around and call it an extra-ordinary meeting so we are locked out,” he said, painting his country a totally different picture from the one created for several years now, and fuelled by recent accusations of arming the militant group Kenyan troops are fighting off in Southern Somalia.

“Even when it was decided that Kenya will send its troops to Somalia we were not consulted. We were not told about it. We only read about it,” said the envoy who is on his second posting in Nairobi.

“But that does not mean Eritrea does not support what Kenya is doing in Somalia. We will always support any effort aimed at stabilising the region but I can tell you Ethiopia has never wanted to have a neighbour who is stable,” he said.

The envoy said “he understands the challenges Kenya is facing by challenges posed by Al Shabaab and it has every right to fight them.”

“These Al Shabaab they have come to your home, they have abducted people and they are doing all manner of bombing. Kenya has a right to pursue them,” he said.

He accused Ethiopia of militarily occupying a huge chunk of their soil “for some time now. “They are not good neighbours they even invaded Eritrea in 1998.”