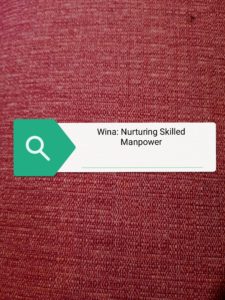 Wina Technical School (WTS) was set up at the stronghold of the EPLF during the struggle for independence in view of fulfilling the basic necessities of the freedom fighters and the people who were in the liberated areas, and, more significantly, taking into consideration those foundations should be laid to meet the demands of human power in the post-independence period.

After Eritrea’s independence, realizing the importance of technical and vocational training, the Government of the State of Eritrea has given top priority to the production of high–quality human capital which is highly trained and capable of mastering and exploiting available technology for the socio-economic development of the country. The Macro-policy of the Government (GoSE, 1994: 40) states that the “emphasis of technical/vocational training will be imparting multi-craft dexterity and skills that enhance the job adaptability and retraining potential of the learner”. This calls for an effective Technical Vocational Education and Training system which can increase the pool of skilled and flexibly trained workers available for employment and self-employment in line with changing technological and national development needs.

During the struggle for independence years, empowering the human power amid the trying war was integral to EPLF’s principle of self-reliance in every aspect of the socio-economic, political, educational as well as the day-to-day activities.

Though the EPLF was running literacy programs and giving vocational training to freedom fighters and people in the liberated areas, the engagement was not sufficient. This served as an impetus to conceiving technical schools. A strategic plan for setting up a school that offers theoretical and practical courses was issued in 1984.  Since having such a technical school was a necessary requisite to meeting the then demands of the EPLF as well as cultivating skilled human power that would serve in liberated Eritrea, the school became functional with limited equipment and 25 teachers who had varied levels of competence.

Overcoming different unforeseen challenges, Wina Technical School was then established in 1985 in Arag and began its operations with 83 students, 44 of whom were female. It started with the departments of General Metal Works, General Wood Works, Auto-Mechanics and Electricity. As the sustainability of the school was influenced by the then military operations, the school was relocated to Etaro. When the war relatively subsided, the school was again relocated to a place known as Ketan (Mi’iraf), which is 22 km away from the main trenches. Through the concerted efforts of the students and freedom fighters,  classrooms, workshops, libraries, and dormitories of teachers and students were established.

Not knowing who would survive to see independent Eritrea, the freedom fighters were confident that Eritrea would be freed and that the country would need skilled professionals who would take part in reconstruction activities. Wina Technical School then graduated its first batch in 1988. Graduates of the school were assigned to different units of the EPLF where they played a major role and are still contributing their share in the post-independence period.

The school set out to upgrade its capability with advanced equipment so as to meet the demands of the small scale plants that were flourishing in the EPLF’s base area.  Eritreans living abroad also started supplying the school with equipment in its later developments.

Teachers assigned to the technical school did their best for the success of the students and played the role of parents. The school was striving to nurture very dynamic youth. As the courses offered in the period prior to Eritrea’s independence were 80% practical and 20% theoretical, the competence of the students who graduated from the technical school was satisfactory.

Wina Technical School continued its operations in Ketan for five years in the post-independence period until 1996. The school was then relocated to Nakfa, not far away from its original location. Since the relocation of the school in an enhanced manner required huge investment, the establishment of a modern Wina was implemented in different phases.

Mr. Kaleab Zeru, director of the school, says “Wina Technical School, which became functional under the shade of trees, with almost worn out equipment, provided training using all the necessary facilities in 1997 and is now operating in well-established workshops and dormitories”.

Wina Technical School used to receive grade 10 students who have excelled academically at secondary schools. However, since 2011, the entrance procedures have changed to give students with average academic performance an opportunity to enroll at the school. At the end of their education students would still have the opportunity to participate at the secondary school matriculation examinations.

At this time, the school has seven departments — Survey, Drafting, General Metal Works, General Wood Works, Auto-Mechanics, Electricity and Construction. At different times, the departments were provided with all the necessary facilities. Rora Digital Library is now being introduced to help students get additional resources and prepare for the national matriculation examinations.

Step by step, the infrastructure is being upgraded. The two phases have been completed and the third phase of constructing additional dormitory rooms, workshops and maintenance work are underway. This is expected to increase the capacity of the school by 50%.

The first phase of the construction that was sponsored by the PFDJ was implemented through Segen Construction Company. In the second phase, the Ministry of Education expanded the school facilities, which were limited to three workshops, through the construction of six additional workshops, a big water reservoir and a bakery.
Mr. Kaleab says “the expansion of Wina Technical School would definitely play a significant role in the country’s economy as well as adding momentum to Nakfa’s development. It has direct impact on the daily activities of the people. Inhabitants of the town of Nakfa can order to buy commodities and can have their furniture and other materials repaired”.
Mr. Kaleab expressed his appreciation of the cooperation of different ministries and associations such as the Governmental garages, Segen Construction Company, and others without which their “effort wouldn’t have been successful”.