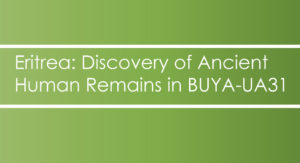 Human Evolution Facts – Ancient human remains have been discovered in the Northern Red Sea region believed to be of major significance in the history of human evolution. The discovery was made in partnership with the Commission of Culture & Sport, Museum of Northern Red Sea, and experts from Italy. Based on the information obtained from experts engaged in such exploration activities, apart from traces of 6 human foot prints dating back to around 800,000 years discovered recently in Buya, two human skulls of 1,000,000 years of age and other human remains have also been discovered in Mulhuli-Amo. Buya and other 200 sites in its environs are of major potential for the discovery of more human remains that could impact the history of human evolution. A one-million-year-old skull bearing traits associated with both Homo erectus & Homo sapiens has been found in the Southern Red Sea Region of Eritrea, pushing back the development of modern human morphology by 300.000 years.