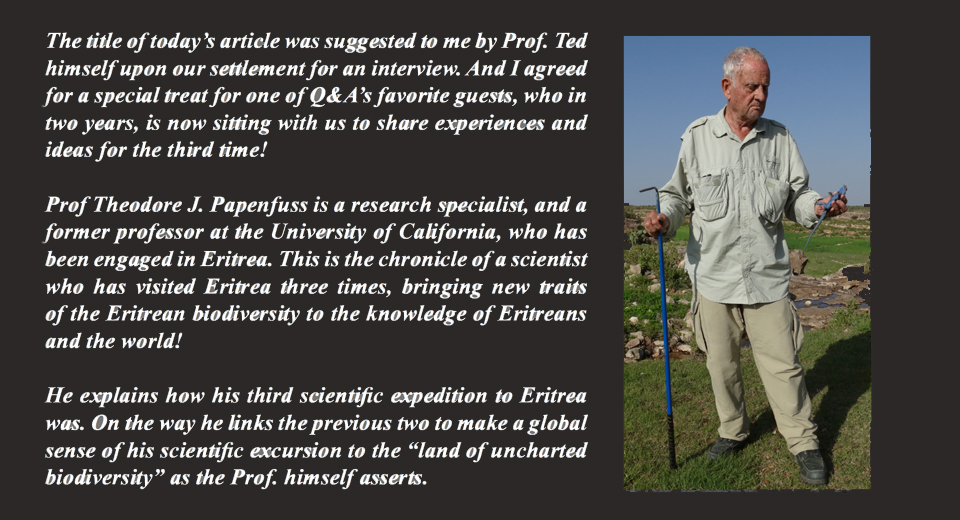 This is your third visit to Eritrea and yet another busy one for you, Prof. Ted.

Oh yes. This time I went to all of the regions of Eritrea and it was an extremely successful trip.

For our readers’ sake… let us try to connect your three trips; for reminders and also to help our readers understand the link between your expeditions to the Eritrean wildlife.

I am sure you do remember the highlight of my rst trip to Eritrea in February 2016. I brought up the issue of the Asmara Toad which until I came only few people in the world knew about. The number of toad specialists in the world is so little that almost nobody outside the people specializing in this eld knew about it. And in Eritrea, literally no one knew about the species named after the capital! So when you and I talked, and you published your article “Do you know the Asmara Toad?” it went viral and both people from the country and outside started showing interest in the richness of Eritrean wildlife.

Originally my focus was on Sudan and my trip to Eritrea was planned to be a side trip. Contrary to what I had expected I ended up busy with much more to do than I anticipated. For my second trip, thanks to the experiences of the rst one, I came back more focused. I shifted my full attention away from Sudan to Eritrea. For my

second trip my target was to look for species originally discovered and described in Eritrea going back to 1828 up to the 1970ies, which are abundant in number, and see if these unique species were still around despite the years of war, habitat destructions and climate change.

By the way, the key reason that made my scienti c trips to Eritrea fascinating are the interestingly versatile geographical composition of Eritrea. Something else that encouraged me furthermore was the fact that people of all level of society are interested to know and learn about the animals they are familiar with but don’t know much about. They’d see the side neck turtle and smaller animals but really don’t know many scienti c details about them. So one of our goals has been raising awareness through posters, discussions and lectures to make people realize that even the wild life is great part of the Eritrean heritage.

Which brings us to the third trip, from which you just came back… What can you tell me about it?

I came back from Gash Barka Region on the 12th of October and then soon after went to the Red Sea Region to continue my expedition to Green Island. As you know, the initial impression of the international community, based on what’s perpetuated on the internet, is that this is a very dangerous and closed country. And what I have been telling my friends

and colleagues, and also what on the way I would like to remind foreigners about, is not to believe what they see on the internet but to come and experience for themselves. There is little good information about the country. A young student from my university, for example, advised me not to go to Eritrea upon hearing that I had just come back from it!

Why am I saying this? It is because I want to express how grateful I feel, mostly, after my latest trip which was extremely successful and how glad I am that I just came in the rst place.

You keep mentioning that your third trip, especially the one to Gash Barka, has been extremely successful. How effective was it?

For my latest and third trip I had a chance to travel through the 5 out of 6 regions of Eritrea. We had several targeted species. In every region we either found something new or reestablished something that was found long ago. For instance, starting from the Central Region the key feature was the Asmara Toad. Then we went to the Northern Red Sea Region where we found the Massawa Gecko, roughly described around 1820, and we also found the Eritrean Side Neck Turtle.

In South Region, in Segheneiti zone, we reached a location of archeological af uence where in 1904 the Eritrean Clawed Frog was rst registered. A farmer working in the Ministry of Agriculture branch in Segheneiti mentioned that the people around are well aware of the species. On the weekend he took us to his farm where in the nearby well we found many more. Moving on from there to the Anseba region, we came across a big lizard named Dori which lives in the rocky areas of Keren and it was discovered by an Italian explorer in 1884.

For the longer trip we went to Gash Barka. The reason of our extended stay in Gash Barka Region was because it was a historical site where the Italians had made some collections in 1930. Therefore, we went to Barentu and there we met the director of the ministry’s branch who showed great hospitality and assistance. I want to extend my gratitude to the people of Gash Barka as civilians, students, shop keepers and the military in the check points and enclosed natural habitats recognized me from a segment of Eritrea TV and encouraged me to do more. In Gash Barka I found a number of toads, lizards and snakes. But interestingly, when one day it rained unexpectedly in Barentu we visited one of the many tree farms and we saw a frog species that was seen only one time in 1930 by Italians in Agordat. It is called the Running Frog. Frogs normally jump but this one runs! I was so happy and surprised to see it. I have to identify it when I go back to the US. The same night I think we found a new species of lizard; we will con rm it soon.

This shows how your (the people of Eritrea) effort in preserving nature is rewarding us all greatly;

new species and some species seen rarely a long time ago are coming back abundantly and commonly in farm areas, walled natural enclosures and tree farms! It is impressive. My outing concluded with the last trip to Green Island in the Northern Red Sea region. And I see a great interest coming from the Ministry of Marine Resources. I certainly cannot wait to comeback and work further with people and young experts I just met in Massawa. 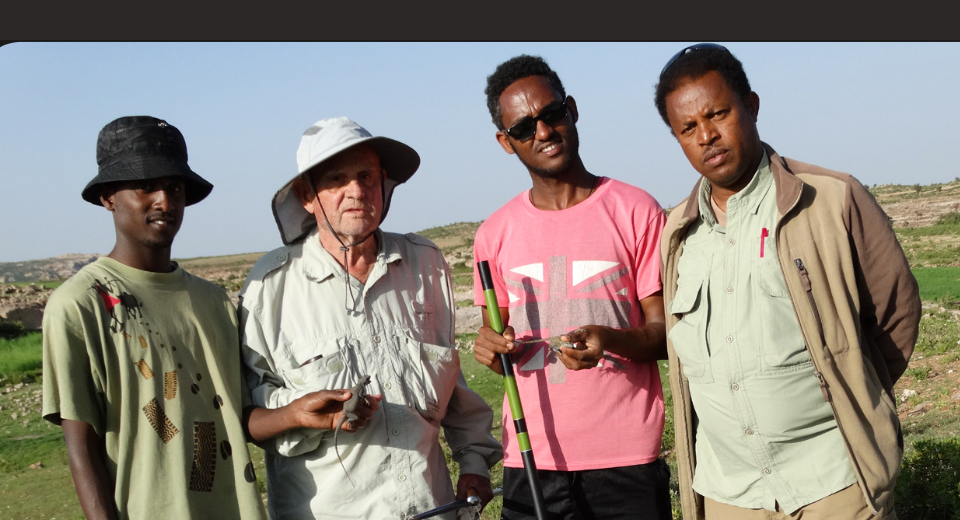 Why do you come to Eritrea as often as you do? Is it that interesting?

Yes it is very interesting. So much so every trip has been a delight. I feel great to be part of your culture and I appreciate the safety I feel in Eritrea. I took part at a friend’s wedding and I spent a whole morning in the Orthodox celebration of Meskel… I must say Eritrea is interesting in countless aspects.

I rst came to Eritrea based on the invitation from the Forestry and Wild Life authorities. The overall aim is to venture in the country’s wild life and make the local people and the international community aware about it. What I immediately learned in the rst trip is that, the emphasis of biodiversity and the protection of the environment and the need to contribute in the global campaign towards climate change through certain and remarkable undertakings of the Eritrean people is the highest form of diplomacy Eritrea is showing to the rest of the world. Since the end of the armed struggle and the new phase of your nation building, the government and people of Eritrea took on the heartfelt initiative to ght climate change by action like the abolition of plastic bags, reforestation activities, and settlement of national enclosures and protection of wild life in general. It is an admirable, and certainly effective, popular campaign strengthened by a conscious and active participation of the Eritrean people.

Prof. you are now about to go back to the States. Let me give you the chance to say anything I might have forgotten to ask.

My successful research in Eritrea on all three of my visits was made possible due to the help of many people, both of cials and local residents of all Regions and Sub-Zones that I have visited. Particularly the Minister of Agriculture Arefaine Berhe, the General Manager of the Forest and Wildlife Authority Abraha Garza, and Futsum Hagos, the Director of Wildlife for the State of Eritrea and their staffs. Their contacts throughout the country made my collaborative and successful research easy, it is my strong belief as I keep continuing working with wildlife conservation of Eritrea, we will make more interesting ndings. All the best until I come back again!