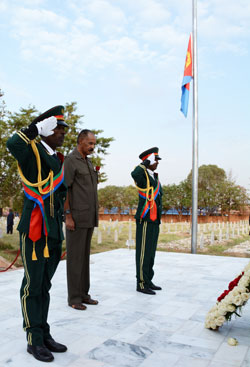 The commemorative event today was conducted at Martyrs Cemetery here in the capital in the presence of President Isaias Afwerki, Ministers, senior PFDJ officials, Army Commanders, religious leaders, members of the diplomatic corps and thousands of citizens.

In his keynote speech, President Isaias pointed out that one of the significant attributes of the commemoration was the transfer of the noble values of our Martyrs to successive generations.  President Isaias further stressed that we can only honour our Martyrs by, at the minimum, upholding our pledge to fulfill their trust and diligently toil to develop the country for which they have paid with their precious lives

The commemorative event was highlighted with artistic performances depicting the glorious legacy of the Martyrs and the steadfastness of the entire Eritrean people.