Eritrea Calls for UN to Respond After Ethiopian Attack 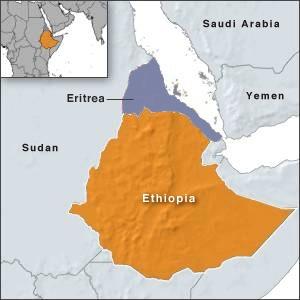 Eritrea is calling for the United Nations to impose penalties on arch-rival Ethiopia, after Ethiopian forces attacked a military base inside Eritrea.

In a statement Friday, Eritrean Foreign Minister Osman Saleh said the incursion is part of a history of “unlawful and provocative attacks” by Ethiopia. He urged the U.N. Security Council to take measures to “ensure justice and the respect of the rule of law.”
Ethiopian government spokesman, Shimeles Kemal speaks in Addis Ababa on March 15, 2012, where he announced that Ethiopia had attacked an Eritrean military base today, where rebel groups are armed and trained by the Eritrean government.

In an interview with VOA late Thursday, Eritrean Information Minister Ali Abdu said any subversive groups in Ethiopia are reacting to their own government’s policies.

“The internal crisis inside Ethiopia, it is a result of its narrow and backward policy of divide and rule being conducted by the Ethiopian regime,” he said.

Ethiopia has repeatedly accused Eritrea of backing rebel groups that attack targets in Ethiopia’s Afar area. Shimeles specifically mentioned an incident in January in which five European tourists were killed.

Ethiopia and Eritrea fought a war between 1998 and 2000 that killed an estimated 80,000 people. Tension between the countries has remained high ever since.

Tags: Eritrea Calls for UN to Respond After Ethiopian Attack