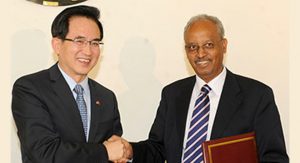 The Eritrean Government and the People’s Republic of China signed  on 18 January an over 87 million dollars loan agreement here in the capital. Finance Minister Berhane Habtemariam from the Eritrean side and Ambassador Yang Zigang of the PRC signed the agreement.

The loan will be channeled to construct the first phase of the 29 km long asphalt road connecting Adi-Guaedad with Habela.

Minister Berhane underlined the strong relations Eritrea and the People’s Republic of China share and expressed appreciation on the Chinese cooperation in development of programs in Eritrea. Ambassador Yang on his part said that the agreement is part of the growing economic, political and social cooperation between the two countries.