Eritrea: A Glance at traditional wickerwork 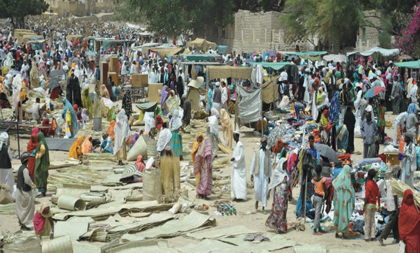 Imagine what possibilities the highlanders in Eritrea could have had, if such numerous wickerwork products had not been part of their daily lifestyles?

As it is commonly known, most of the Eritrean families households feature utensils made of the leaves of arkobkobay (doum tree), highly prevalent in the Eritrean lowlands. And assuredly, during your first pace to a traditional home in the Eritrean highlands, take for granted the fact that your eyes will witness the existence of Mesob, conical shaped wickerwork with platform for holding injera, a typical food staple among Eritreans. What really takes me by storm of interest about Mesob is the fact that it consummates a lot of time and skill to make.

Meanwhile, the skills to prepare such traditional wickerwork are not easy and are truly laborious. In the initial stage, you expect to take leaves of the doum tree and allow a time till it became fully dried. And this is what you can see in the undiscovered open markets of Agordat and Keren abundantly. After buying it from the market at affordable price, our mothers take it home. After thinking cautiously, they start to exert their skills in accomplishing such eye-capturing traditional wickerwork.

Therefore, when ready to start the tedious work of crafting, the women soak the lakha in water to make it flexible. And some

well skilled women use a colored powder which needs to be mixed in hot water. And as a result of this, the leaves get good looking colors known as kihe tslmi, certainly.

Another interested researcher, Marcel Claxton, has also detailed about this in his article entitled “Eritrea: The Other New Horizon for Tourists (The Chronicle of Travelers’, p.21, 2009). He elaborated clearly that the spiral structure on which the lakha is wound is called edni. One uses an awl to pierce holes in the edni to make the lakha which lastly describe as a complete revolution for producing beautiful patterns.

In addition to this, women skilled in wickerwork also use a tall and slender grass with shining surface, argehe, to decorate their products attractively.

Meshrefet, which we use for fanning a brazier, agelgl, another traditional utensil which used to be carried by women to marriage ceremonies to take injera, mekhombia, conical lid, sometimes used as a ceremonial hat for dancing by women, are therefore among the products of the laboring skills.

Similarly, in the lowlands, lakha is used to make everything from mat prayers to wall paper, mattresses, carpets…etc. Besides, the fiber is used to make ropes for making cots, sacks, and soft chairs among others. 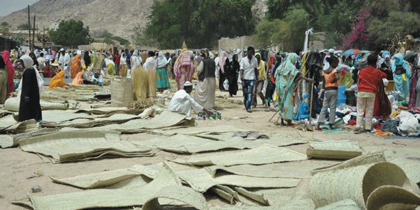 However, from all products of the wickerwork, Zembil is the most common (famous) among

Eritrean mothers and it is easy to hear many patriotic nationals and 1960s youngsters to shower their witnesses about Zembil. As the opportunity of education was severe despairing at that time, students had to leave their villages and go studying sheltered in large cities. And surely, the only option they had to answer their food demands of their food is from the contents of what the parents were sending. Whatever the food stable it is, Zemibil was the handling basketry product.

Besides, Zembil played a significant role in the harvesting of Beles, a picky and seasonal wild fruit. Industrious Beles-vendors walk along the steep mountains of the eastern escarpments, starting from Arbe-Rebue till

Segheneiti and other surrounding areas, carrying large zembils full of this wild fruit hanging from both bends of a wooden pole. By

selling this fruit, they earn a lot of money which helps them to cover range expenditures account.