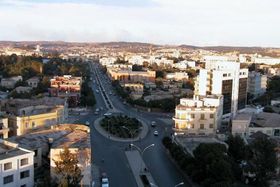 ASMARA, the capital city of Eritrea – located on the horn of Africa, boasts the most shining collection of colonial architectural wonders in Africa. It is like a film set from an early Italian movie, with vintage Italian coffee machines and outstanding examples of Art-Deco architecture. This hidden African gem remains barely touched by the hand of tourism yet it’s definitely one of Africa’s most peaceful, secure and welcoming destinations.

Peaceful neighbourhoods, pavement cafés, pizza parlours, pastry shops, a relaxed pace of life – you’ll feel like you’ve stepped into a southern Italian town. The climate is a feature of its own: Asmara is bathed in sunshine eight months of the year. Asmara is possibly the safest African capital for travelers. It is one of the cleanest cities in Africa. The streets are elegantly lined with palms and a string of boutiques, coffee-shops and restaurants.

With a population of over 600,000 people the city boasts a 700 year history; even having legend as the city where the Queen of Sheba gave birth to the son of Solomon, Menelik I. Under thirty years of Ethiopian occupation, the city was allowed to deteriorate, but it still retains its essential beauty and since coming under Eritrean control in 1991 it has been undergoing a rapid improvement in infrastructure, building repairs and repainting. Between 1936 and 1941, Asmara was a blank canvas on which its Italian colonizers were able to design and build their own urban utopia in East Africa. The artists, architects and engineers who came to practice there could escape the constraints imposed on their activities in the more conservative European environment, making it an even more exceptional city than one can initially imagine. Today it is estimated that under 1,000 Italians remain inhabitants of this city. However there an estimated 100,000 descendants of Italian Eritreans living within the city’s borders.

Christians and Muslims have lived peacefully together in Asmara for centuries setting a fine example in harmony and unity. The towns and villages surrounding the city in the highlands are predominantly Christian. The city is home to the “We Are the Future” center, a child care facility giving children a chance to live their childhoods and develop a sense of hope. The center is managed under the direction of the mayor’s office, and the international NGO Glocal Forum serves as the fundraiser and program planner and coordinator for the WAF child center in each city. Each WAF city is linked to several peer cities and public and private partners to create a unique international coalition. Launched in 2004, the program is the result of a strategic partnership between the Glocal Forum, the Quincy Jones Listen Up Foundation, with the support of the World Bank, UN agencies and major companies.

Asmara has been proposed as a possible new addition to the UNESCO World Heritage Site List, for its outstanding examples of 20th century architecture and town planning. The Historic Center of Asmara was placed on the World Monuments Fund’s 2006 Watch List of 100 Most Endangered Sites. The listing was designed to bring more attention to the city to save the center from decay and redevelopment and to promote restoration.

Asmara’s very diverse cultural heritage is obvious: three of the most prominent landmarks in the city are the Catholic Cathedral, the Al Khulafa Al Rashiudin Mosque and the Enda Mariam Coptic Cathedral. Not far from the Cathedral is the very busy Shuq district, with its stalls of fruits and vegetables, spices, chickens and eggs, furniture, ceramics, and clothes.

The city is easily accessible by regular scheduled flights into the main airport. Navigation through the city is pleasant with clean city busses and taxi cabs offering negotiable rates. There are hundreds of hotel offerings for any type of traveller from budget hostels to luxurious five-star accommodations offering the finest in luxurious treatments.

Have a coffee with your travel agent and learn more about visiting this hidden African gem!