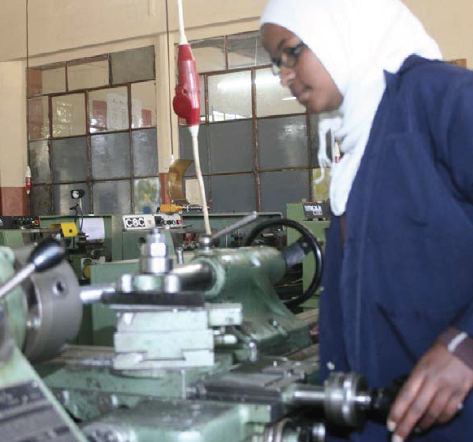 Of all the bad and disgraceful experiences the world has ever seen, those that have an effect on a specific or targeted group as a whole have secured a black point in history. There were colonialism, apartheid, caste system, ethnic cleansing, etc. The seriousness of these is that the effect is holistic influencing the whole member of a specific group. This means, when it deprives a chance it does so to the whole, hence it makes the cost much heavier. One such experience that has a global manifestation or which is pervasive everywhere is gender inequality. It is a sad fact that women share equal role and burden in raising a society but seen and treated as less. They have been subjected to various forms of suppression by the same society they nurture as their lives are severely constrained by cultures that limited them to the role of “keeper of the family,” which is often justified by the female capacity to give birth to children. What makes this even worse is that the cost transcends this particular group and affects the whole society as it cripples half of the potential resources and achievements that could be harvested.

Societies’ marginalizing of half of their members in such improvidence for so long perhaps starts from the moment of birth which then on is solidified and endorsed vigorously. In many societies there is severe discrimination on the basis of gender which starts even from the birth of the child. While the birth of a boy is celebrated with gunfire and distributing sweets and food, the birth of girl is usually considered as an unlucky incident if not as shame. They are also subjected to many harmful cultural practices like genital mutilation and others. The girls then are forced to stay in houses and are rarely sent for education. Girls are married off without their will through exchange marriages and selling the girls into marriage. The result of this is that it forms identity by which young people accept ascribed roles and limit them within that framework. The fact that reproductive work, childcare and household chores are seen as the natural responsibility of women poses a major obstacle that women have to confront in order to achieve equal opportunities. In effect, this attribution of roles determines an unequal access and control of resources and opportunities, which negatively affects women’s self esteem, self-confidence, and eventually lowers their social and labor performance.

It is true that with the advancement and provision of easy access to education, the status of women has been improving in the last couple of decades. However, there is yet a lot more to go to reach to perfection, especially in the developing nations. But then, our world’s experience has clearly demonstrated that change can only be materialized mainly by the oppressed ones. To begin with the true meaning and essence of that suppression can only be defined or described by those who have actually experienced it. Thus they are the one best suited to suggest and bring about the remedies. What this in return guarantees is that they are responsible to make sure that any chance of attaining those remedies is appropriately used in order to lead the way out of the darkness. Therefore, if we say education is the remedy for gender inequality then females are expected to make the best out of it.

As the main aim of education is enlightenment, an educated female would mean an enlightened one. And this enlightenment would be used to further enlighten the wide sum of the group to forge solidarity that would finally put an end to oppression.

The other fact is that one justification for the suppression has been the dominance of the male in the economic sector, while the female was restricted in the house. Thanks to education, however, nowadays the economy of the world is becoming increasingly diverse, as technology is rapidly advancing. The proliferation of the economic sector has demanded more skilled mind in a wide range of areas. This has in a way opened a chance for females to demonstrate that they are quite capable of accomplishing things as good as males, which unsurprisingly they have done so unequivocally. Therefore, if more educated females are made to be fit to adjust and take part in the economic sector they will be able to contribute more, there by counter the above justification. Because, equal share in economy should mean equal say that would equate equality.

In any way the conclusion is that education is the only way out of this rather saddening fact and females, more than anyone, should exploit it to the maximum. There are of course some biased attitudes toward female education lingering as a remnant and extension of the very component of suppression. On the other hand, it is an undeniable truth that now more than anytime the participation of female in education is showing a consistent progress. The transformation of this reality in to full-scale participation of women in education should be inspired by specially those who got the chance. Their demonstration through their achievement is the best assurance for their equality as they can convince the society while being a role model to their sisters. More over they’ll be best equipped to fight suppression.

Within this fact then, it’s time to ask how our females are doing with their education. Even though our struggle for independence played a great role in combating inequality by ensuring a full and equal participation of females, the ultimate solution was yet to come from education. Fortunately, the effort towards this goal was huge that much has been done in securing fair participation of females. And it can be said that we have began to share the fruits of this effort. However, it is not altogether without reservation as increasing shifting of attention from education is becoming rampant. In some cases one will fear that schools might be serving knowledge as their peripheral purpose, or students might be losing their sense of duty and direction. Yet in many instances one might notice students doing or valuing things in a way that obviously haven’t take in to consideration their future.

Taking the undesirable results of all these for granted, the point of great concern here is that, in this turning point of fighting inequality specially female students should think twice and revise their consciousness. Because, our transformation to a fair and equal society can only be reinforced by them.