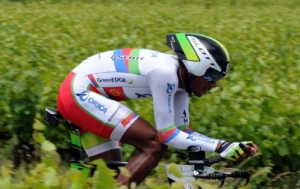 Daniel Teklehaymanot’s graduation to WorldTour level at Orica-GreenEdge this season has been a significant stride in Eritrean cycling’s progress at international level and he will continue in that pioneering fashion at the London 2012 Olympics on July 28.

“It’s going to be the first time that Eritrea has been represented in cycling at the Olympics, so I’m very happy,” Teklehaymanot told Cyclingnews. “I’m looking forward to riding for Eritrea in the national jersey at the Olympics in London. It will be special.”

Like Colombia before it, Eritrea’s rich domestic cycling tradition had long been overlooked by the rest of the world, but in recent years, the East African country has begun to make an impact on the international stage, with Teklehaymanot its leading light.

The 23-year-old has been a dominant force in African cycling in recent years, winning the continental road title in 2010 as well as back-to-back crowns in the time trial and team time trial, but it was his performance at the 2009 Tour de l’Avenir that first saw the major European teams sit up and take notice.

Riding for a UCI World Centre selection, Teklehaymanot rode to an impressive 6th overall behind Romain Sicard and Tejay van Garderen, and was set to join Cervélo TestTeam at the end of the following season, only for the outfit to disband due to financial problems. After another year in Aigle with the UCI, Teklehaymanot did reach the ProTour ahead of the 2012 campaign when he signed for Orica-GreenEdge.

Following his move to Italy in February to base himself near GreenEdge’s European training centre in Varese, Teklehaymanot made his debut for the Australian team at the Volta a Catalunya in April. “I did my first race in Catalonia but it was snowing a lot on the third stage so I abandoned,” he explained. “The next race I did was Circuit de la Sarthe and since then I’ve been to Turkey, Norway and the Dauphiné.”

Teklehaymanot was speaking in Châtel shortly after he had finished the Critérium du Dauphiné, and he acknowledged that the Alpine event had been the highest-quality race of his career to date. Teklehaymanot was particularly prominent on the front of the peloton on the opening road stage, as he put in a lengthy stint on the front in defence of teammate Luke Durbridge’s overall lead.

“For me it’s my first year as a pro so I was very happy to race in the Dauphiné,” he said. “It’s a high level race and it’s hard, a big ProTour race.”

After the Dauphiné, Teklehaymanot headed back to Eritrea via Egypt, in what was his first trip home in five months. His three-week stay in Eritrea marks the mid-point of his season, though his ambitions for the second half of the campaign remain unchanged. “I’ve been riding for my teammates,” he said. “We’ve been working for each other and I’m happy like that.”

Teklehaymanot’s spell at home in Debarwa coincides neatly with the Eritrean national championships and it’s testimony to the standard of domestic racing that he only could only manage 13th place in the road race twelve months ago. His elegant, almost languid pedalling style did carry him to the time trial crown, however, and he is hopeful of repeating the feat in 2012.

As well as visiting family and friends, and chasing national titles, Teklehaymanot’s trip home will also allow him to fine-tune his preparation for the London 2012 Olympics. In Eritrea, altitude training is a necessity rather than an option.

On his return to Europe, Teklehaymanot is slated to ride the Tour of Poland as his final warm-up ahead of London. In 2008, he even travelled to Beijing in the hope of being Eritrea’s first cyclist at the Games only to find that an administrative error meant that he hadn’t been entered. Four years on, there will be no such confusion as Teklehaymanot lines up as the standard-bearer for an emerging generation of Eritrean talent.

“There are so many riders there but the level has maybe been limited up to now,” he said. “But now there is a lot of progress, there are a lot of riders coming to Europe and it’s good. I hope in the next few years we will see more professional riders from Eritrea.”

Teklehaymanot may not have to wait so long: the fast-finishing Natnael Berhane has been tracked with considerable interest by at least one major European team.