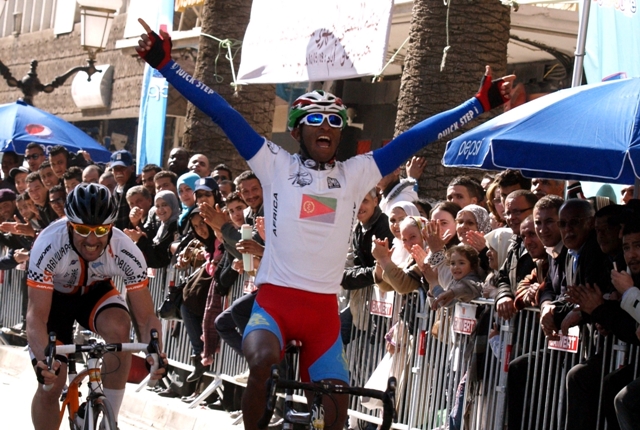 The fourth stage of the Tour of Algeria in 2012 was played yesterday. The momentum is building toward the Oran Convention Centre and the arrival in the hills above Santa Cruz, a distance of 137 km. The fourth stage was the most difficult, since the runners have come a very hilly route, characterized by several ribs, until the finish line in Santa Cruz. However, this step revealed a new yellow jersey in the person of Berham of Eritrea, who donned the shirt, by counting every time the four stages contested so far. Moreover, during this fourth stage, Berham came in third place in 3h 28 ’43”. The latter was very happy at the end of the race, since he’s the new yellow jersey of the Tour of Algeria in 2012, after the fourth stage. “I’m very happy, since I’m the new yellow jersey after this fourth step, and my teammate grabbed the top spot in the race, which is wonderful for Eritrea,” the yellow jersey. He added: “Now, my goal is to win this Tour of Algeria in 2012.” Remember that the wearer of the yellow jersey of the previous step was the Spaniard of the Greek team, Joaquin Soprino. In fact, it has captured at the end of the fourth stage of the two suits, the best sprinter’s green and polka dot jersey of best climber. The first place of this fourth step is returned to the Eritrean Tessfom Issak in 3h 27 ’28’, while the Algerian Hicham Shaaban, Sovac team, finished the course in 3h 28 ’42”. “It was the last chance for our team, this is why we have set a goal before the start of the race to snatch the first place, but unfortunately I have not been able since the Eritrea was too strong, especially in the final sprint, “said the runner Sovac. Thus, delivery of the shirts was done by an emblematic figure of the Algerian cycling, ie, Kebaili Ahmed, who participated in the past five Tours de France. The final stage is scheduled for today, where the riders will make the loop of Oran, a distance of 140 km.