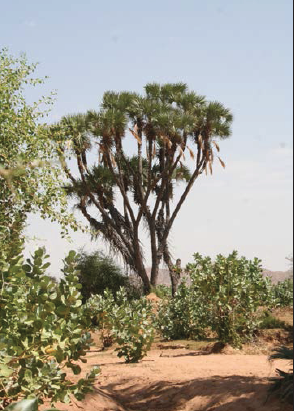 The cropping system is very flexible because it is largely determined by the amount of floodwater and rainfall received, which vary from year to year. Crops failures due to shortage of water is very common, thus the farmers have developed a cropping mechanism (a cropping system) to deal with crop failures. At the beginning of a cropping season, a late maturing crop is planted. If this crop fails due to over flooding or shortage of water or insect attack, it is replaced by early maturing variety or by different type of crop (Feterita & Dumburi/Wedi Aker). If crop failure is repeated a number of times, drought tolerant sorghum variety like Durra is planted mainly for the production of animal feed for their livestock but not for crop production.

The most common cropping system followed is to plant sorghum as the first crop, followed by maize and watermelon is planted as a third crop. During that time the farm areas used to get enough rainfall to allow good germination of the newly sown maize. But, gradually it become difficult to plant maize, because of drought, enough rainfall is not received to allow good germination of the crop.

These days, the main crop of sorghum is followed by its first and sometimes by the second ratoon. Except in areas where maize is planted as the first crop, in the other farms, the growing of maize as a second crop has been stopped. In the southern parts of the eastern lowlands where the evaporation rate is very high and the annual rainfall is very low, only one crop, maize is usually planted per year.

In the last 1525 years, significant changes have been observed in the cropping system. Except in the farms where maize is grown as the only crop, the growing of maize as a second crop decreased significantly. Because of recurrent drought, relatively very small rainfall is received that it becomes difficult for the newly sown maize to germinate. As a result of drought a cropping system ratooning become the common practice.

In the sorghum ratooning system, the first sorghum crop is harvested and its stalks are cut and removed. Then the first ratoon is let to grow and harvested in a similar way as the first crop. Depending on the rainfall or floodwater or the amount of residual moisture on the soil, a second ratoon may grow to maturity and harvested. Usually, the second ratoon doesn’t grow and produce seed, thus it is usually harvested for animal feed.

Watermelon is sown during the hot season, when the soil is dry, thus, one to three watering is required for successful germination of the plant. The growing of watermelon is not popular in many of the spate irrigated farms.

Farmers who have easy access to the market only grow it. Crops like tomato, pepper, okra, etc are not planted as major crops, but in small quantities at open areas or along field boarders.

Crop rotation, inter cropping and planting of leguminous crops to improve soil fertility is unknown in the spate irrigated farm. Crop residue which can be a source of organic manure and which can help to improve the physical structure of the soil are removed from the fields to be used for animal feed or for constructing the local farmhouses.