We call upon the Canadian government to ensure that our community is not a target of hate crimes or other forms of discrimination by individuals, the media or public institutions. 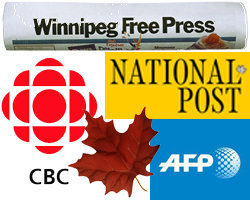 The media outlets also appear to be disinterested in hearing the views of the majority of Eritrean-Canadians who are law abiding and hard-working people that have contributed in making Canada the mosaic of cultures that it is. CECCO would like to take this opportunity to address the fact that none of the members of our coalition have ever been approached by the media or the Federal Government or its agencies to determine if our community in Canada has ever been a victim of the serious allegations of “extortion” by the Eritrean Consulate.

Our communities have existed for several years and some for decades in service to the community and should be the reference point for understanding the Eritrean-Canadian community in Canada. We fear that the media’s tone and lack of due diligence is seriously distorting the picture of our community in Canada. For example, the National Post ran a story on November 05, 2011 titled “Eritrea raising money in Canada, financing terrorists to attack Canada” – this is a serious and dangerous misrepresentation of our community and works to paint a picture that Eritrean-Canadians sympathize with, or are supportive of, terrorists – this could not be further from the truth. Given the fact that our communities have never been consulted, it appears that the media is intentionally ignoring the voices of the majority of Eritrean-Canadians who may have a different story to tell.

Our communities are finding it increasingly difficult to express themselves, on May 16, 2013, the Eritrean Cultural & Civic Centre of Calgary was advised that their application to raise the Eritrean flag at City Hall in commemoration of Eritrea’s 22nd year of independence was rejected. The City of Calgary’s protocol office maintained that, “as the UN Security Council currently has sanctions against Eritrea, The City of Calgary will not be flying the Eritrean flag outside City Hall.” The Eritrean Flag is a non-controversial national symbol that belongs to all Eritreans regardless of their political stripes.

The decision by the Calgary protocol office puts into question whether Eritrean-Canadians will continue to benefit from all the rights afforded to them as dual citizens. CECCO reached out to the City of Calgary to inquire about the decision on Tuesday May 21, 2013 and it received assurance that it would hear back from the protocol office in 24 hours. This evening, in an email to CECCO, The City of Calgary replied “our original decision remains and we will not fly the Eritrean flag outside City Hall this year.” We call upon the media to reach out to our communities across Canada and the CECCO so as to provide a story that is reflective of facts on the ground.

We call upon the Canadian government to protect our rights and ensure that our community is not a target of hate crimes or other forms of discrimination by individuals, the media or public institutions. As Eritrean-Canadians continue to grow in numbers and integrate into the fabric of Canadian life, CECCO believes that good relations between Canada and Eritrea are essential to promoting an atmosphere of understanding; CECCO is committed in working to improve this relationship in the interest Canada, Eritrea and our local communities.