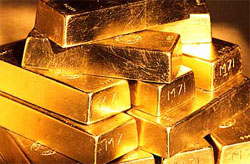 It is believed that the State of Eritrea has also cashed in more than $170-million in revenue from its 10% free carried interest, 5% royalty and 38% corporate tax alone. Any cash that would otherwise be paid to the state for its 30% stake will keep going to Nevsun’s coffer until the purchase price of $253.5-million been paid in full through after-tax cash flows.

Gold recovery held steady at 88 percent in the fourth quarter.

The best quarter of the year in terms of gold output was the third quarter in which Nevsun pumped out 110,000 ounces gold by milling 446,000 tonnes ore. In comparison Nevsun recovered the fourth quarter’s 101,000 ounces gold from 455,000 tonnes of ore.

The TSX- and Amex-listed company, Nevsun, said construction for a second-phase copper plant at Bisha started in June 2011 with ongoing civil work and equipment delivery. The South African EPCM contractor for the copper phase, SENET, and the Eritrean construction company, SEGEN, are taking part in the project as it advances to steel work and equipment installation this year.

The copper plant start-up is set for the first half of 2013.

On news of the production update Nevsun’s share price was up three percent to C$6.41 as of press time.