AUSTRIA VOICED ITS SUPPORT FOR IMPLEMENTATION OF THE ALGIERS AGREEMENT 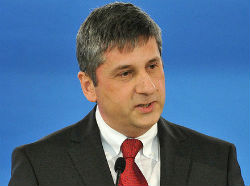 Vice Chancellor and Foreign Minister of Austria,  Michael Spindelegger, expressed his concern over the growing tensions between Ethiopia and Eritrea.
“Reports of attacks on Eritrean territory near the Ethiopian border are causing alarm bells to ring and are pointing to the need for preventive diplomacy“, said the Vice Chancellor.
Spindelegger demanded an end to the violence and urged the politicians in charge to exercise restraint, to respect the principles of international law, and to seek a peaceful solution to outstanding issues.
Moreover, he demanded compliance with and implementation of agreements such as the Algiers Agreement of 2000, in which Ethiopia and Eritrea had committed themselves to respecting a binding award relating to the demarcation of their borders. In this context, the Foreign Minister reminded of Austria’s systematic engagement in support of the rule of law.
Spindelegger admonished both governments to their responsibilities for the people in the two countries, in particular for the people living along the common border, who must be given a perspective:
“Sustainable stability can only be achieved if both countries recognize the necessity to get along and reach out to each other to develop prospects for a future in peace.”
The Vice Chancellor pointed out to the significant and long-standing commitment of the European Union in the Horn of Africa in several areas such as humanitarian assistance, development, and security. He maintained that, in view of its role as a respected and recognized negotiation partner in the region, the EU is predestined to become active in the spirit of preventive diplomacy together with other international partners.

Tags: AUSTRIA VOICED ITS SUPPORT FOR IMPLEMENTATION OF THE ALGIERS AGREEMENT