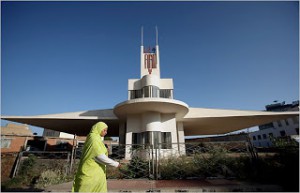 When most people think of the world’s safest city, cities like Luxemberg, Bern, Geneva, Helsinki, and Singapore usually come to mind. While those cities are often citied as being one of the safest cities, the people who often compile these list almost always overlook Africa. Unfortunately, in many people’s minds, Africa is usually perceived with wars, poverty, hunger, crime, etc. Little do they know that one of the world’s safest cities is to be found in Africa.

Asmara, the capital city of Eritrea, is without a doubt the safest city in Africa and arguably one of the safest, if not the safest city this planet has to offer. Crime in Asmara is virtually unheard of and most of the city’s residence often leave their homes, car doors and bikes unlocked. But before you think this is some lame attempt of swindling readers with misinformation, take the time to read the following quotes made by various American and European journalist, authors, and seasoned tourists about Asmara’s renowned safety.

Michela Wrong, a British author who has traveled to Eritrea extensively wrote the following paragraph about Asmara’s safety:

The country was awash with Soviet and American weaponry, yet crime was almost unknown. The most dangerous thing that could happen to you in Asmara after dark was to stumble on a piece of broken paving. Ironically, a capital that had witnessed so much violence was blessed with an extraordinary tranquility, it breathed peace in time with the cicada’s rhythmic rasp. Asmara was certainly the only African city in which not only was I regularly offered lifts by strangers, but I accepted them without hesitation.

I didn’t do it for you: how the world betrayed a small African nation By Michela Wrong, p. 16

One’s expectations were always being turned on their head. “Have you got any local money?” A handsome Eritrean student who had shared my flight asked as we were about to leave the airport terminal. Before I had time to mutter a 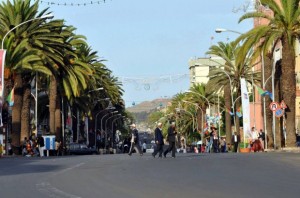 refusal, he had extracted a banknote from his wallet: “Here, take this for the taxi. You can pay me back later.” It was a typically Eritrean moment: in one of the world’s poorest nations, I had just become the scrounger.
I didn’t do it for you: how the world betrayed a small African nation By Michela Wrong, p. 16

A reporter for British newspaper the Telegraph visited Eritrea and wrote an article about her experiences in Asmara. When she had gotten to the part where she was supposed to inform her readers on what part of Asmara to avoid, she responded with the following:

What would you tell them to avoid?
Nowhere – I think Asmara must be the safest city in the world. I never feel frightened. Local and foreign women can walk the streets at night without fear, and local people do not hassle foreigners.
My kind of town Asmara, Eritrea –  20 Nov 2006, Telegraph, by Jennie Street

A New York Times reporter by the name Jeffrey Gettleman describes Asmara as almost having “no crime”, and went on to highlight that most Asmarinos don’t even “bother to lock up their bikes.” And Mr. Gettleman reminds his readers that if Asmara’s safety and  beauty sounded too good to be true for them, that it isn’t. In other words, Asmara is the real deal.

There’s almost no crime. Asmara is known as one of the safest cities in Africa. Most people don’t even bother to lock up their bikes. The climate is ideal, 70s and 80s during the day, 60s at night. The hotels are cheap but rich with character. On the coast, the beaches are deserted. And the water? Evian clear.

If all this sounds too good to be true, it isn’t.
Recalling La Dolce Vita in Eritrea, New York Times, October 5, 2008, by Jeffrey Gettleman

When the reporter Robert D. Kaplan visited Eritrea, he describes how Asmara is a place where the citizens can leave their car doors unlocked and prowl the back streets at all hours without fear of being robbed”. He goes on to mention that foreign diplomats move freely around the country without guards or other escorts, as if they were home.

Security, which consumes the Western diplomatic and aid communities in Sana’a (and everywhere else in the Middle East), is barely an issue in Asmara, Eritrea’s capital. Despite its tattered storefronts, Asmara not only is one of the cleanest capital cities in Africa but also may be the only capital south of the Sahara where one can leave the car doors unlocked or prowl the back streets at all hours without fear of being robbed, even though the police are barely in evidence. American, Israeli, and other resident diplomats and aid administrators in Eritrea move freely around the country without guards or other escorts, as if they were at home.
A Tale of Two Colonies, The Atlantic, by Robert D. Kaplan 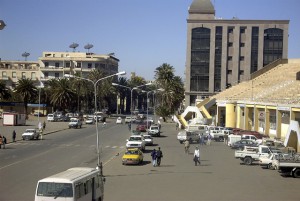 He moves around the capital in the passenger seat of a four-wheel-drive vehicle, with only one escort car, stopping at red lights. Western diplomats here say they have seen him disappear into large crowds of Eritreans without any security detail at all. “It’s easy to put a bullet in him, and he knows it,” one foreign diplomat said to me.
A Tale of Two Colonies, The Atlantic, by Robert D. Kaplan

Finally, we end this article with a seasoned tourist’s accounts of Asmara:

Not only is Asmara beautiful, clean and pleasantly cool, it is also a very safe and relaxed city, where one can walk around at any time of the day or night without having to worry about safety, or even more minor hassles like beggars.
Asmara: The “Little Rome” of Africa, by Laszlo

So next time you think of the world’s safest cities, make sure to include Asmara near the top. It’s only crime is being associated with the outdated stereotypes of Africa.

The following photos are of Asmara, Eritrea. Click on images to see larger quality.