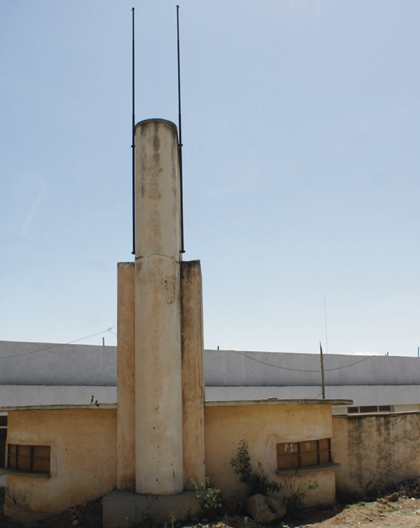 The city of Asmara as we know it today developed from a conglomeration of villages. With Italy’s occupation of Eritrea in 1889, it grew to become the country’s capital city. The design principles and architectural styles were wholly indebted to European tendencies at the turn of the century. Around the still modest city centre, from 1935, a phenomenal expansion took place, initiated by Mussolini’s imperialist engagement in East Africa. Asmara was to become the new Rome of the “Africa Orientale Italiana” (the Italian East Africa).

Between 1935 and 1941, Asmara developed rapidly, and transformed itself from a relatively provincial city of the European style into a highly sophisticated metropolis, one of the most modern cities in the whole of Africa. The character of its appearance today derives from this period. Italian architects designed and built for the needs of the growing city.

Aspectrum of Modernist buildings came into being which, on an area of about four square kilometres in the town centre, unites the most diverse architectonic movements and characteristics of the period.

Most of these use the architectural language of the Architettura Razionale, the Italian Modernism of the 1920s and 1930s.

For centuries, Eritrea was influenced by the cultures and religions of different rulers, from the Egyptians and the Ottomans to the Europeans. Over the course of history, these left their traces on the culture and architecture of the country. Today, this coexistence of different cultures and religions still has an impact on the vitality of the city.

From 1900, the intermixture and neighborhood of diverse formal languages and styles (Syncretism) in combination with local building techniques influenced the architecture of the new capital city of Asmara and, above all, that of its sacred buildings. A specific example of the fusion of styles and techniques was the orthodox cathedral Enda Mariam built in 1938/39. Elements of the local African building tradition were absorbed into the design of the tower roofs, the portal, and the main building.

sensuous themes. Following the ornate Art Nouveau,Art Deco, with its clear, linear and functional lines, was in keeping with the spirit of Modernism.

The Cinema Impero is one of the most elegant buildings in Asmara in the Art Deco style and, at the same time, a remarkable example of the cinema architecture of the 1930s. The tiered interior has an organically curved form. Rows of pillars crowned by lions’ heads separate the auditorium from the screen. Stucco motifs of African scenes, dancers, palms and antelopes, which distantly recollect Art Deco, adorn the walls. The décor of the external façade, on the other hand, incorporates elements of technical aesthetics.

The Razionalismo movement began rivaled the Novecento and the traditionalists of the Scuola Romana. Razionalismo combined an artistic concept, which, first and foremost, incorporated a new understanding of spatial concepts, with the application of contemporary scientific insights into, among other things, technology and hygiene. Architecture was to evolve from the analysis of its functions and its everyday usage. The formal language thereby referred to basic geometric elements such as spheres, cuboids, cylinders, cubes and pyramids.

A large number of buildings in Asmara follow this architectonic tenor: The City Sanitation Office, the administrative building of the municipal utility and waste disposal provider. In the entry area, vertical and horizontal lines combine to form a striking alliance with the circular awning. With its clear structure, plasticity and coloring Selam Hotel is the most brilliant example of rationalist architecture in Asmara.

Futurism, with its vigorous references to the changes wrought by modern industry and technology, held one of the most radical artistic positions. The speed of machine-powered vehicles and violence, destruction and war were glorified as breaks with tradition. In architecture, the designs focused on factories and multi-storey apartment blocks, whose formal language was directly derived from the world of machines.

In Asmara, the Fiat Tagliero service station, designed by Giuseppe Pettazzi and built in 1938, is the most impressive example of the influences of this movement. With its 30 metre-long freestanding

concrete cantilever roof, it not only echoes the design of an aircraft the machine most admired by the Futurists but also symbolizes the innovative confidence of Italian technologies and businesses in the international context.

In the 1920s, the Italian architectural scene was deeply divided. The most significant movements of Futurismo, Razionalismo, the Novecento and the Scuola Romana were characterized by divergent formal languages. Nevertheless, to varying degrees each group in its own way invariably claimed, with reference to ancient Rome, to create a new national style.

With Mussolini’s takeover in 1922, the state’s desire for a significant image to represent a glorious Italy received a new dimension. This issue was resolved in the second half of the 1930s, with the advent of Monumentalismo: the coming together of all aspects of each individual movement.

The Casa del Fascio building (present day Ministry of Education) is the clearest example of this transition in Italian architecture. The frontage was erected in 1940 as an amendment to the rather modest headquarters of the fascist party lying behind it, which was built in 1928 a strategy, which testifies to a politically demonstrative motivation rather than to practical necessity.

The end of Italian rule brought Asmara’s rapid growth to a standstill. With the invasion of the united British and Ethiopian forces in April 1941, the Italian engineers and architects withdrew. They left behind, as the British Ministry for Information reported in 1941, “a European city with wide boulevards, fantastic cinemas, imposing fascistic buildings, cafés, stores, two-lane streets and a first class hotel.”

As far as architecture is concerned, the British military administration didn’t do much compared to the bold rationalism that had characterized the late 1930’s. Asmara’s idle architectural growth persisted during the period of federation with Ethiopia and the 30- year long struggle of liberation. The later caused extensive devastation but Asmara survived the period relatively unscathed.

The beauty of Asmara’s buildings conveys the image of modernity despite peeling paint, falling plaster or unhinged shutters. Since independence Asmara has grown rapidly extending its coverage over a wide area of the hinterland.

Migration, the new functions as a capital city and investment changed the city. Fortunately Asmara’s expansion has not followed the pattern of other African cities where slums and squatter settlements prevail.

Asmara’s growth has been relatively controlled, although major challenges still remain. The issue of rebuilding after independence and decades of foreign rule when nothing happened, has infused all Eritreans with the hope of future development. While facing the problems of urban planning there is growing concern that this world- renowned centre of early twentieth- century architecture should be preserved by all means.

An incident of 1996 illustrates perfectly the determined and liberal attitude of Eritreans: The German architectural firm commissioned to design the new headquarters of the National Bank of Eritrea suggested that the most prestigious location for the building was the site in front of the Catholic Cathedral. A grotesque fourteen-storey glass building with numerous smaller structures around it occupying four blocks of historic Asmara was proposed. The central building was to be the tallest in the city, soaring high over the bell tower of the Cathedral.

Before the bank could be constructed the building occupying the site, the notorious former Italian prison “Caserma Mussolini“, would have to be demolished. When the plans for this move were made public, a group of Eritreans, mainly former inmates, protested vehemently and successfully against the destruction of the prison building.

However another construction project was put into pratice: When the colossus called Nakfa House rose at the Southern end of Sematat Avenue, dwarfing that icon of Asmara’s modernist architecture Fiat Tagliero – the people of Asmara, began to feel the horror of something that was going terribly wrong. The Nakfa House did not only desecrate Fiat Tagliero, that fine example of modernist architecture; it reduced the area around it to a mean and disorienting small space. There were several other buildings (Nyala Hotel, The Red Sea Corporation Building, etc) that upset the delicate qualities of Asmara’s Modernist Architecture, but the building of Nakfa house provided the wake-up call.

Realizing the special character of Asmara, the government and people of Eritrea set out to preserve this exceptional heritage for the benefit of its own population and for present and future visitors. At the same time there is an increased awareness of the need to ensure further development. In 2001 a historic perimeter in Asmara was established, encircling an area of about four square kilometers of 4% of the total area of the city. This area contains the city’s historic centre and the majority of its historically significant buildings that need protection from unwarranted modification. The government promulgated a moratorium on new buildings or modifications of old buildings in the historic perimeter until new guidelines and regulations have been finalized. The guidelines and regulations will establish stringent criteria that aim to ensure that the integrity, harmony and scale of Asmara’s unique urban environment are.