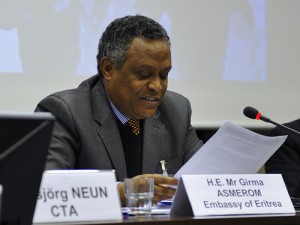 Below is excerpt from the interview that was held on 16 January 2013.

* The recent HRW report on the Eritrean Mining Sector and National Service programme is financially and politically motivated cheap shot, and is replete with distortions and lies.

* The report defied elementary methodology of research. No wonder after compiling their baseless and criminal, cut-and-paste 29-page report the originators of this document have no option but to conclude their hollow report by saying that “they are not sure whether Nevsun has used or not used national service conscripts for its mining activity in Eritrea”.

* It is full of sound-bites that have been spined by different quarters for the last ten years to create confusion and wrong perception about Eritrea. It contains no new or substantial information.

* It is a criminal report that is meant to interrupt and derail Eritrea’s economic development activities. It targets the basic interest and welfare of the Eritrean people, not of the Government.

* It is meant to intimidate and scare-away potential foreign investors. It is also meant to deprive the country its sources of hard currency which is crucial to import necessary materials and products which are essential for agricultural and industrial development of Eritrea.

* The main sources of foreign exchange for all countries that are at a developmental stage are their raw materials and natural resources. There is no way that the Eritrean Government which is not dependent on foreign aid can undertake programmes aimed at the eradication of poverty and diseases; expansion of schools, hospitals, electricity, and telecommunications services; building of roads, dams etc… without utilizing its human and God/Allah given natural resources.

* Eritrea’s vision and the objectives of its national service program is almost similar to that of the Turkish, Swiss, Israeli, Egyptian, Brazilian, South Korean, Singaporean… etc national service programmes. Manifesting the highest form of hypocrisy and deliberate ignorance the report has the audacity to call the agricultural and infrastructural projects – such as road and dam building activities – carried out by the national service participants “forced labour”, and the miliary deployment at the border with Ethiopia as “indefinite”.

* According to the Eritrean National Service Proclamation, all Eritrean men and women above the age of 18 have to take part in the national service programme. The programme is designed to protect the nation’s security and sovereignty, consolidate ethnic and religious harmony, and enhance economic development.

* During peace time, the length of the national service programme is only one year and half. The graduates automatically become part of the reserve army.

* As is the case in all the countries that have national service or reserve army programmes, at the time of war or threat of war or natural disasters all able bodied national service participants – active and graduates- as members of the reserve army, are obliged by law to be mobilized to defend the sovereignty and territorial integrity of their country. That is what Eritrea did when war broke- out between Eritrea and Ethiopia in 1998, and when a volcanic eruption took place in the Southern Red Sea Region of Eritrea in 2011.

* Today, due to Ethiopia’s continued occupation of sovereign Eritrean territory including the town of Badme, the Eritrean people and Government have no other option but to be vigilant and maintain a strong and disciplined army. Therefore, there is nothing wrong with Eritrea mobilizing its entire human and natural resources for its national development activity and the protection of its sovereignty. Surrender is not an option!

* Military institutions all over the world have their own rules and regulations and modus operandi. The Eritrean army can not be an exception when it deals with military discipline and engagement.

* During the 30-years struggle for independence as well as today the guiding principle, motto and slogan of the Eritrean people has been perseverance and determination. We believed in ourselves and the justness of our cause. We fought and succeeded against all odds. We had and still have confidence in what we do and what we want to achieve. This is clearly reflected in the music and songs of our nine ethnic groups. Popular Tigrigna songs such as ‘Ykealo’ and ‘Kekewn Eyu’ which literally mean ‘Yes We Can;’ and ‘Nikid Teray Brhan Eyu Kedmena’ which also means ‘Forward!’ can be cited as examples. These songs and the confident attitudes are internalized in the psyche of almost every Eritrean wherever he/she might be, and whatever he/she is doing. It is then appropriate for Eritreans to rightly brand their country as “ERITREA: THE LAND OF THE CAN-DO PEOPLE”.

* For the record, I want to say that every Eritrean was surprised when President Obama used “Yes We Can” and “Forward” slogans and sound bites in his first and second presidential campaign, respectively. Today, it is President Obama who has used the Eritrean motto, tomorrow we don’t know who will follow. Therefore, it is about time for the Eritrean People and Government to assume exclusive ownership of their thirty-year old motto, “ERITREA: THE LAND OF THE CAN-DO PEOPLE,” as their national motto.

* Today National service participants in Eritrea whether they are engineers, doctors, construction workers, farmers or pastoralists are diligently, confidently and equally contributing for the realization of Eritrea’s self-reliant model of economic development.

* All national service participants, whether they are deployed at the border in the trenches or in sectoral Ministries and Departments, or construction companies, have equal rights and get equal stipend.

* As is the case in every country, companies who invest and operate in Eritrea, including mining companies, are required to abide by the domestic investment code, and other relevant rules and regulations.

* The officials of HRW and other similar organizations and the architects of this report who earn six-digit salaries have to produce monthly, quarterly and annual reports to satisfy and impress their funders and handlers. That is their main job and the reports are considered their outputs. They have to compile this kind of reports about different countries and governments for a living and to secure additional funding. Their motivation has never been and will never be the protection of human rights. If they get a better salary offer from another organization which has nothing to do with human rights advocacy, they have no qualm to immediately submit their resignation to their current employer and to accept the new offer.