A time-tested private firm that will further prosper 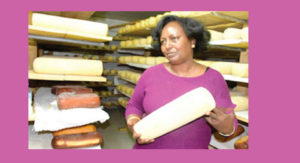 “The journey to success is like a wall that must be climbed in a step by step manner with patience and persistence.

” These are the words of an initially desperate housewife who sold chicken in her neighbourhood to make ends meet and has decades later grown to be one of the most successful entrepreneurs in Eritrea through her relentless hard-work, overcoming countless obstacles and challenges. Mrs. Azieb is the owner of one of the biggest private dairy farms in the country, producing 3000 to 4000 liters of milk a day in addition to yoghurt, butter and nineteen different kinds of cheese. The farm is located in Halhale, Zoba Debub, and the firm sells its products through its three outlets in Asmara — Akrya, Tiravollo and Marcato. It is also a major provider of dairy products to mining companies at Bisha and Zara, Hotel Asmara Palace and many other hotels and restaurants. This private firm has played a significant role in stabilizing the milk and dairy products market in the country.

The economy of Eritrea has gone through many ups and downs throughout its history. The most significant development in the country’s economy was registered during the period of the Italian colonization. The Italians established a transportation network, discovered many natural resources, exported and imported goods, leading to urban development and social change. Advancements in the economy, however, were hampered and reversed during the subsequent British rule during which an estimated £86 million worth of industrial plant and equipment was removed and sold (Negash, 2001) to bolster their notion of partitioning Eritrea by making it economically unviable.

The economy was further weakened during the federation period with Ethiopia. Under the Ethiopian rule enterprises were forced to relocate from Eritrea to Ethiopia and the 30-year armed struggle left the country’s infrastructure in ruins. Although the government of Eritrea inherited a dilapidated country it was capable of rising like a phoenix from the ashes and has literally created a country from scratch.

The government of Eritrea has since recognized the private sector as the engine for the country’s economic growth and has thus devised a liberal proclamation on investment. However, years of unrest following the unjust post-independence war and unwarranted UN sanctions have driven many investors away and undermined the economy. Entrepreneurs like Ms Azieb, however, were willing to invest in their country and succeeded in supplying food to their people at fair prices, providing jobs to many and solutions to business problems for many others while prospering as a successful enterprise in the country.

When Ms Azieb and her family submitted their business plan to the Ministry of Agriculture they chose to base their business in Halhale. When they first got there, the area was nowhere near fertile and conducive for their line of production. But, Ms Azieb said, “we made a decision and there was no turning back and we kept on working”. War and continuous droughts have caused substantial environmental damage in Eritrea, reducing the percentage of area covered in forests and woodlands from 30% in 1920 to less than 1% after independence. Nevertheless, Ms Azieb and her family’s hard work and optimism turned the land fertile which is now home to over 100 cattle and a variety of dairy products. Moreover, the lack of skilled human resource left behind by the war was tackled by hiring the services of a Dutch enterprise to provide training courses on pasteurization of milk and the preparation of other
dairy products. In addition to that, Ms Azieb also sent her son, Abraham, currently the manager of the firm, to Italy to further hone his skills in cheese making. Today, Mr Abraham has earned a name for himself as a cheese maker all over the Horn of Africa, Ms Azieb added. This has allowed the firm to open a branch in Sudan. Ms Azieb believes that anything is possible if you put your mind to it, and she is currently working hard to realize her ultimate goal of going global as an internationally acclaimed and competitive business.

Eritrea has many advantages that make it attractive to investors. They include its extensive natural resource and its strategic location with access to a major world shipping lane. With the recent rapprochement between Eritrea and Ethiopia and the lifting of the UN sanctions, numerous opportunities for different kinds of investments are created and the government has been showing its zealous support through meetings with the Russian government for potential investments, the recent invitation of 80 Italian entrepreneurs and many more initiatives. Furthermore, the government recognizes agriculture and livestock production as the mainstay of the Eritrean economy as they are essential for food security in the country. Investment proposals on areas like Ms Azieb’s will obviously be given priority. Hence, time-tested private firms such as Ms Azieb’s dairy farming enterprises will further prosper and new ones will flourish in this new era. For this to be a reality, as the country acknowledges, the human capital should be developed.

Tags: A time-tested private firm that will further prosper