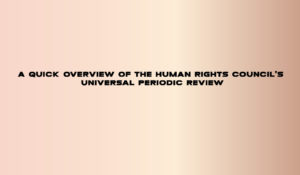 Earlier this week, on Monday 28 January, Eritrea submitted its Third Cycle Universal Periodic Review (UPR) Report to the 32nd Session of the Working Group in Geneva.

The report, which was presented by a delegation led by Tesfamichael Gerahtu, Ambassador at Eritrea’s Ministry of Foreign Affairs, elicited responses and recommendations from almost 100 countries, the vast majority of which were positive and constructive.

The UPR is a unique mechanism of the 47-member, Geneva-based Human Rights Council (HRC) aimed at improving the human rights situation on the ground of each of the 193 United Nations (UN) Member States. Through the UPR mechanism, the human rights situation of all UN Member States – regardless of size, wealth, or power – is reviewed every 5 years. 42 countries are reviewed each year during three Working Group sessions dedicated to 14 states each. The reviews are conducted by the UPR Working Group, which consists of the 47 members of the HRC. It is important to note, however, that any country can take part in the dialogue with the country being reviewed. Each review is assisted by groups of three states, known as “troikas”, who serve as rapporteurs. The selection of the troikas for each state is conducted through a drawing of lots following elections for the HRC membership in the United Nations General Assembly (UNGA).

The UPR was established when the HRC was created on 15 March 2006 by the UNGA through resolution 60/251. Recall that since its creation in 1946, the United Nations Commission on Human Rights (UNCHR) served as the functional commission mandated under the Economic and Social Council (ECOSOC) to act as the UN’s principle mechanism and international forum concerned with the promotion and protection of human rights around the world.

However, the body was often criticized for its excessive politicization, selectivity, and double standards.

In a 2005 report, then-UN Secretary-General, Kofi Annan criticized the UNCHR and called for the establishment of a new human rights body to replace it. He noted how the UNCHR’s “capacity to perform its tasks has been increasingly undermined by its declining credibility and professionalism,” and that “a credibility deficit has developed, which casts a shadow on the reputation of the United Nations system as a whole.” Subsequently, in 2006, the HRC was established to replace the Commission, and mandated to “undertake a universal periodic review, based on objective and reliable information, of the fulfillment by each State of its human rights obligations and commitments in a manner which ensures universality of coverage and equal treatment with respect to all States.” The first UPR session was held in April 2008; since then, all 193 UN member States have been reviewed twice within the first and second UPR cycles.

As noted above, as one of the main features of the HRC, the UPR is designed to ensure equal treatment for every country when their human rights situations are assessed. It provides an opportunity for all states to declare what actions they have taken to improve the human rights situations in their countries, to fulfill their human rights obligations, and to overcome challenges to the realization of human rights. The UPR also includes a platform for sharing of best human rights practices, which can be a significantly positive force for capacity-building and technical assistance. Currently, outside of the UPR, there are no other universal mechanisms in existence, and the UPR is also the first human rights mechanism to ever achieve 100% of participation – twice – by UN member States. In addition, due to its very nature, the UPR permits civil society to advocate and to take part in implementation of human rights obligations.

For many countries, including Eritrea, the UPR mechanism is regarded as the main mechanism of intergovernmental cooperation to examine human rights issues at the national level in all countries, without distinction. One of the main reasons that so many countries actively participate and cooperate with the UPR is because it functions as a cooperative mechanism with a non-adversarial and interactive dialogue-centered approach. Moreover, it maintains a focus on promoting the universality, interdependence, and indivisibility of all human rights and the equal treatment of all countries. Importantly, like most UN Member States and almost all developing countries, Eritrea strongly opposes double-standards as well as counterproductive selective, politically-motivated, country-specific approaches. Instead, Eritrea strongly believes that the promotion and protection of human rights should be based on impartiality, genuine dialogue, constructive engagement, and close cooperation in order to strengthen the capacity of states to comply with their human rights obligations.

Previously, Eritrea submitted national reports to the UPR in 2009 (November) and 2014 (February). Its next review is expected to be in January 2024. The three country representatives serving as rapporteurs (the troika) for the review of Eritrea during the current reporting cycle were the Bahamas, Bangladesh, and Rwanda. There were a number of highlights in the report presented during this reporting period.

For example, in regard to the 92 accepted recommendations from Eritrea’s Second Cycle UPR, 80 recommendations (85.87%) were fully implemented, while 12 recommendations (14.13%) were partially implemented. As well, there were significant efforts made to improve standards of living in the country, including: land for housing has been continuously distributed and houses have been built; accessibility to electricity has been increased to 43.5% (urban 81% and rural 22.6%); road transport has expanded by 62% and 85% of villages are covered; clean water access has shown remarkable progress with 85% rural coverage and 92% in urban areas; and despite economic challenges, a new remuneration system that substantially increased civil service salaries was introduced and is gradually being expanded. Notably, Eritrea is party to 108 international conventions and instruments; in recent years, it acceded to the Convention against Torture and Other Cruel, Inhuman or Degrading Treatment or Punishment and the Convention against Transnational Organized Crime and its Protocol to Prevent, Suppress and Punish Trafficking in Persons, Especially Women and Children. Many other important developments and significant improvements were also disclosed during the review. Of course, at the same time, Eritrea, like all countries, faces human rights challenges, and there is still much work ahead in order to ensure better and higher human rights standards.

Notably, the vast majority of countries praised Eritrea’s efforts and progress on human rights. For example, Russia stated that, “Eritrea has progressed significantly in the sphere of human rights,” while China declared that it, “Highly appreciates Eritrea’s progress in the promotion and protection of human rights.” In addition, Mexico expressed praise for, “the progress made [by Eritrea], including in the increased registration of girls in schools,” while South Africa was, “encouraged by [Eritrea’s] efforts to promote the development and wellbeing of children.”