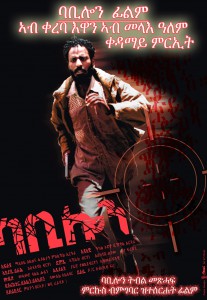 A new film Called Babylon will be shown in world wide Premier in all major cities around the world starting in the next two weeks.

Babylon the film is produced by Ministry of defence in Eritrea based on the book called Babylon written by Dr. Kibreab Fre in 1995. The film  is a Fiction produced by Wedi Feradai and the Audiovisiual unit, but it is based on factual and historical background  and reflects the historical reality of Eritrea.

The Plot of the film: The time was fast approaching for the Ethiopian rule in Eritrea coming to an end during the fall of the Dergue regime. After 30 long and bitter years of struggle the high ranking officials of the Ethiopian regime coming face to face with the unimaginable defeat, they devise a deadly plot. They recruit a sleeper cells inside Eritrea with the aim of destabilising the country from inside the country and rendering it ungovernable and eventual return of Eritrea to the rule of Ethiopia. The lead actor Samuel finds himself with impossible situation of foiling an intractable situation. The film is full of suspense from the start to an end