A Great Eritrean Demo in a Fantastic Weather 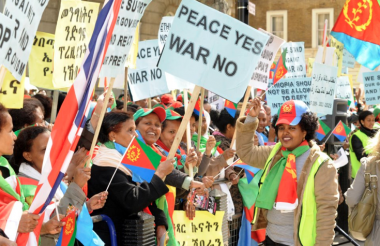 In commemoration of the 10th anniversary of the EEBC Final and Binding verdict, the British Eritrean community in the UK and Friends of Eritrea organised a peaceful demonstration in London. Initially, the plan was to march from Hyde Park to Downing Street on a Saturday as we had done in the past, but due to restrictions on the day, the Police would not grant us permission to either conduct the demo on a Saturday or march as planned. Instead, we were granted permission to conduct the demo on Monday 30/04/2012 between 10:00 am and 2:00 pm within a designated area outside Downing Street.

This was a challenge to the community because it is during office hours, however, as witnessed during the glorious occasion, people made arrangements like booking annual leave in advance in order to join the Demo. Some members of the community travelled from as far as Manchester, Leeds, Sheffield, Birmingham and other parts of the UK to join the great Demo. This shows how passionate and committed people are to the cause.

The weather during the weekend leading to Monday 30/04/2012 was generally wet, windy and cold, however, to our delight, on Monday, the weather was fantastic, generally sunny and warm. Someone I know said, “God is on our side because all we ask for is for the rule of law and justice to prevail and this, in principle puts us on the same side as the Almighty, after all the rule of law was first introduced when God gave Moses the Ten Commandments”.

In addition to the fantastic weather, there was another good reason why the people were jubilant and cheerful. The rumours that had been spreading like bushfire the previous week, regarding the state of health of the President were proved to be false when Eri-TV conducted live interview on Saturday evening. The timing of his interview was impeccable and a vital source of energy with which those in the demo were fully charged.

I arrived at Downing Street shortly after 10 am and there were about 50 people there flying the Eritrean flag high, making it the centre of attention for the passers-by including tourists and passengers travelling through the main bus route.

Within an hour, there were hundreds of Eritreans gathered carrying Eritrean and UK flags and placards as well as cheering slogans and at times dancing to the tunes of the popular Eritrean songs particularly those by Weid Tikabo and Jemal.

By midday, there were over a thousand Eritreans of all ages and calibre from all over the UK chanting and cheering the slogans. Their noises were heard loud and clear by passers-by and civil servants working in Downing Street and in the nearby building of the Foreign and Commonwealth Office (FCO).

At 12:30 pm, a delegation that represented the community went to Downing Street to hand in a letter and the petitions that were signed by those in the demo to the Office of the Prime Minister and shortly afterwards marched back to cheering and jubilant crowd.

The Eritrean community delegation had also made arrangements in advance to meet with the FCO officials responsible for the Horn of Africa. This meeting was scheduled for 2:30 pm. The demo was peacefully concluded following a traditional dance and speech by the organisers advising people to disperse peacefully and go home in while the delegation walked towards the FCO building for the meeting.

The delegation met with three FCO officials to convey the community’s grave concerns, anger and frustration with the UK government’s lack of impartiality as well as the handling of its moral and legal obligation vis-a-vis the Final and Binding Verdict of the EEBC decision and its support for the unjust sanctions 1907 and 2023 imposed on Eritrea which are based on unsubstantiated accusations that lack hard evidence.

The delegation met with the FCO and discussed the aforementioned paramount issues for over an hour. The delegation asserted that the UK government has a moral and legal obligation to help implement the physical demarcation of the boundaries which have been virtually marked by the EEBC in 2007 and to put pressure on Ethiopia to vacate from occupied Eritrean territory. Furthermore, the group with the help of various documented examples like those statements made by US Ambassador in Ethiopia which were subsequently disclosed by Wikileaks emphasised that the accusations made by the Somalia Monitoring group are unsubstantiated and lack evidence. Also, valid reasons were highlighted indicating that the Monitoring group is neither impartial nor independent as it is claimed to be. The delegation reiterated that Eritrea is innocent until proven guilty rather than guilty until proven innocent as it seems to be in this case. The delegation emphasised that the burden is on the Monitoring Group to prove that Eritrea is guilty but not on Eritrea to prove its innocence.

The FCO officials listened carefully and made notes of the statements made by the members of the delegation, however, their response was the same old story which can be summarised as follows:-

The UK government recognises the Final and Binding verdict of the EEBC, however, they made a point that an impasse is reached as the Ethiopian Government is demanding engagement in order to address the border dispute and allow demarcation to take place. (note: the term dialogue repeatedly used by the State Department officials is morphed into “engagement” )

The UK government will not use the aid money they give to Ethiopia as leverage to put pressure on Ethiopia so it allows demarcation to take place. Also, they reiterated that the aid money is not used to arm Ethiopia.

The UK government accepts the report produced by the Somalia Monitoring Group as factual and impartial and supports the sanctions; however, these sanctions are designed such that they do not have an adverse impact on the economic hardship of the local population. Also, they have rejected Ethiopian government’s repeated attempts to link the recent abduction of European tourists in the Afar region to the Eritrean government as they have not been able to provide any evidence. They have also, rejected Kenya’s claims that planes travelled from Eritrea to make deliveries to Somalia.

In response to the three points listed above, the delegation responded by stating that:

After three rounds of conflict where over 70,000 people were killed and hundreds of thousands displaced from their homes, the two governments chose to negotiate/dialogue/engage. Following negotiations that involved the international community, the two governments agreed to sign a Final and Binding Verdict in 2000. The legal experts in their wisdom knowingly authored the Final and Binding Verdict for valid reasons and the EEBC reached the Final and Binding Verdict on 13 April 2002. Ethiopia’s continued rejection of the verdict hijacked the demarcation process; however, after waiting patiently for 5 years, the EEBC in its capacity legally and virtually demarcated the boundaries and issued copies of maps to both countries, to the UNSC and to other relevant bodies for reference purposes. Therefore there is no longer border dispute as it was legally settled and what we have is an occupation in violation of international law.

The delegation pointed out that when the UK government finances Ethiopia’s badly needed social and economic expenditure with £330 M annually , the regime in Ethiopia is directly enabled to splash its revenue on buying arms, for example 200 tanks from Ukraine at a cost of $100 M in 2011. Furthermore, the delegation informed the officials that as disclosed by Campaign Against Arms Trade (CAAT) it was disturbed to learn that “between the beginning of 2008 and September 2011, the UK licensed military and dual use equipment for export to Ethiopia.

On the subject of the Monitoring group, the delegation gave examples of accusations including the fiasco when it was reported that Eritrea had 2000 soldiers in Somalia in December 2006 when Ethiopia and US invaded Somalia. Furthermore, the delegation questioned the inappropriate sources of information used by the Monitoring Group in gathering unsubstantiated accusations. These sources are known to have their own motives and hidden agendas. The delegation asserted that the Somalia monitoring group is neither impartial nor independent by highlighting the political motives and compromised position of the person leading the group and advised the officials to review the report critically and with impartiality.

For some members of the delegation, these were the same old stories they have been listening for the last ten years and for those who know the Eritrean history and the cunning role played by successive UK governments since 1940s, the pattern and behaviour is consistently that of injustice and double standards perpetuated against peace loving, God fearing Eritrean people who against all odds and the wishes of these governments prevailed achieving their right to self-determination militarily and subsequently gained international recognition in 1991 and 1993 respectively. And in spite of the declared and undeclared sanctions and lack of foreign aid that comes with strings attached, Eritrea is set to achieve food security and the various Millennium Developmental Goals.

The statement below which was disclosed by Wikileaks is one of the examples used by the delegation:-

In conversation with Ugandan President Yoweri Museveni held on 20 September 2009, Ambassador Rice: “… reminded Museveni that past experience suggested that the UNSC would not block a resolution led by African members and supported by the African Union. She shared the U.S. read that, if Burkina Faso and Uganda co-sponsor this resolution, the British will support, the French will “keep their heads down” and will not block…”

Our peaceful struggle will continue until the rule of law prevails over the rule of the jungle.

Tags: A Great Eritrean Demo in a Fantastic Weather